More are paralyzed in U.S. than previously thought 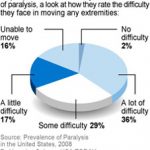 About 5.6 million Americans have some degree of paralysis — far more than previously thought, according to the findings of a telephone survey released today by the Christopher & Dana Reeve Foundation.

Previously, the highest estimate of paralyzed Americans was 4 million, says Joe Canose, vice president for quality of life at the foundation.

Of the 5.6 million with paralysis, nearly 1.3 million have a spinal cord injury. Yet, Canose says, previous estimates of Americans with such injuries hovered at around a quarter million for 20 years. “Christopher (Reeve) didn’t believe it,” he says. “People were living longer, so how could it be the same” for decades?

The much larger numbers revealed by the survey should spur drug companies to develop treatments for the spasticity that affects many paralyzed people, he says. And, he says, the data should force insurers to reconsider “upside-down health care” that won’t cover a $400 wheelchair seat cushion but will spend thousands on the pressure sores it could have prevented.

In his survey, “about half the people who said they had a spinal cord injury reported having only a little or some difficulty moving,” he says. “There are an awful lot of people out there who do get a spinal cord injury that is not terribly severe. They may walk with a cane. That’s it.”

Cahill says he was taken aback by ethnic disparities. Most striking: 7.3% of those with a spinal cord injury said they were Native American or Alaskan natives, who make up only 0.8% of the U.S. population. Motor vehicle accidents might be to blame, he says, noting that 90% of Navajo Nation roads aren’t paved.

Edwin Trevathan, head of the National Center on Birth Defects and Developmental Disabilities at the Centers for Disease Control and Prevention in Atlanta, called the survey findings “sobering.”

Yet, Trevathan says, focusing only on paralyzed people underestimates the problem: “If you look at the number of family members impacted, then the number is actually larger.”