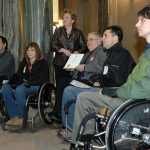 REGINA — With May 2009 proclaimed as spinal cord injury and physical disabilities awareness month in the province, the Canadian Paraplegic Association (CPA) wants to spotlight everything its members can do.

Huber said that given the chance, people with disabilities will more than prove themselves and that they have many gifts that people don’t know about.

Biletski is an up-and-coming wheelchair rugby athlete who has played with the Regina Wheelchair Rugby Club for the past two-and-a-half years. She said the awareness month provides a good opportunity for the public to realize what people with physical disabilities can do.

When the public sees people in wheelchairs out accomplishing things, Biletski said she hopes it will not only serve as inspiration, but also change the perception people may hold about those with physical disabilities.

Smith, who is a musician and manager of the band The Poverty Plainsmen, said it feels great to know that the CPA is receiving recognition. He hopes people will learn about what the CPA does and what it means to people with disabilities.

“There’s people out there that have disabilities and still lead active lives, and good quality lives, with the assistance of the members from the CPA,” said Smith. “Anybody who is disabled … can contact the CPA as a place for a little bit of an outreach centre.”

Social Services Minister Donna Harpauer presented the certificate of proclamation to Huber after introducing the CPA members to the Legislative Assembly.

“It’s very important that we recognize, and that we have an awareness of, inclusions for physical disabilities within our province. It makes us all more mindful of the small things, such as making buildings accessible to individuals with disabilities,” she said.

Facebook
Twitter
Email
Mix
Digg
Previous articleVeterans offer their thanks
Next articleIt seems tragic, but he says it’s a challenge