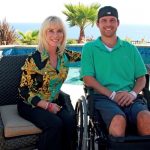 It only takes a split second for a life altering spinal cord injury to occur.

Anthony Purcell, 24, of Newport Beach, knows that all too well.

After diving into the ocean in Florida in 2010 and hitting a sand bar, that’s all the time it took for him to fracture his C5 and C6 vertebrae.

It didn’t take his mother, Micki, much longer to realize that they had no idea where to turn or what to do next.

He was in ICU for five weeks and rehab for less than 30 days and then the Purcell family was “thrown to the curb,” she said.

“Literally, we left that hospital not knowing where to go, what to do, what resources [were out there], what our next move would be,” Micki Purcell said.

After some research they found Project Walk in Carlsbad and they found out where to get supplies, equipment and a wheelchair, as well as other resources.

The Purcell family fortunately had the money to get Anthony into regular sessions of rehab, Micki Purcell said, but she felt compelled to do something for the families that did not have the financial means to get the care and help they need.

So the Newport Beach mother and son duo started Walking With Anthony, a non-profit organization dedication to helping spinal cord victims get the rehab they need but can’t afford.

The organization is now sponsoring four people to get the help they need as well as paying for some regular living costs. Each person that they’ve helped has shown tremendous progress, she said.

Even if they don’t walk again, both Purcells agreed, they get healthier, stronger, more independent, better circulation, longer life expectancy, and more.

Ideally, they would like to help out another 20 people in the next year, but they can’t afford to help everybody at this point.

The organization gets private donations and holds fundraisers, but Purcell would like to approach some of the big corporations for sponsorships.

A lot of the big companies are interested in funding research, Anthony Purcell said, but their foundation is about helping with the “right away” when “boom, something happens and they’re sitting there in a hospital bed and they need someone to help now.”

There are so many people out there who desperately need the help, Micki Purcell said.

“We get emails every day crying out, ‘Help! Help! Help!’” she said. “People are begging for help.”

Thee are a lot of people that need a lot of help, she added.

“You basically have to relearn everything,” Anthony Purcell said. “My lungs collapsed 17 times, so the first thing that I had to relearn to do was breathe.”

And it’s extremely important to be in the right place mentally, he added.

“When you first get hurt, your mental is so (screwed) up… It’s so bad… Your whole outlook on things (changes drastically),” he said. “Once you start progressing mentally, then things come back into place.”

And talk about progress, Anthony is much stronger than he was two years ago and is well on his way to one day walking again.

Although, it’s about more than just being able to walk again, he said, it’s more important to regain his independence.

He’s made incredible progress in that department too.

He just got a car and his license, and is looking forward to driving again, he said. He also recently started working full-time, is traveling again, and has pumped up his social life.

“I don’t really look at the big goals, I concentrate on the smaller goals,” he said. “It’s not the end result it’s the journey… It’s how you make that progress.”

The organization also helps SCI victims in other ways. They are currently working with the Dr. Oswald Steward at the Reeve-Irvine Research Center.

“(He) has a huge potential cure for paralysis,” Micki Purcell said. “It’s amazing.”

He needs $1.5 million to get through the research project and to take it to the next level, clinical trials, she said.

“(Steward) has fundamentally changed the history of curing paralysis from spinal cord injury,” in collaboration with Harvard University’s Associate Professor of Neurology Zhigang He, a Walking With Anthony press release from earlier this year stated. “Through a revolutionary discovery involving the PTEN gene, researchers have regenerated nerves in the damaged spinal cord of mice responsible for movement and sensation in the body.”

Steward and He believe that mice results can be duplicated on the human body, according to the statement.

All of their fundraising, research support and financial sponsorship of individuals are all part of one ultimate goal: Help as many people as possible with spinal cord injuries to get the rehab they need and get better.

Heat a danger for disabled

Rediscovering Love: My 6-year-old and her quadriplegic Dad