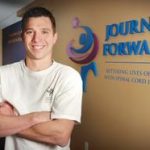 Dan Cummings was swimming with friends in a lake when he dove into shallow water. In an instant, his life changed, and at 19 he was diagnosed a quadriplegic. Cummings spent four weeks in the intensive care unit at Boston Medical Center, and doctors told his family he would be lucky to make it through the night, let alone walk again.

He spent the next three years in physical therapy for 45 minutes a day, three days a week – all that his health insurance would cover. Unwilling to accept his diagnosis and learn to live in a wheelchair, he decided he needed a more intensive program, and found a center in Southern California that worked with patients with spinal cord injuries for up to three hours a day.

Before he could move, Cummings spent a year forcing himself to be independent enough to live on his own. In 2003, he moved to California and began the program, and almost four years later, he walked out the doors. He moved back to Boston, determined to open a similar center so that people like him would not have to move across the country for treatment.

In January 2008, Cummings opened the nonprofit organization Journey Forward at 755 Dedham St. in Canton. He said the 10,000-square-foot center is the largest of its kind on the East Coast. His four trainers – who are exercise physiologists, not physical therapists – are working with 22 paraplegic and quadriplegic clients.

The 28-year-old Hyde Park resident has recovered to the point where he can use his arms in a limited capacity. He uses a walker to move around, but is working toward walking without it.

What was your goal for Journey Forward when you opened it?

I wanted it to be the model of what was out there in California. It’s an intense, exercise-based recovery program. We do a full body approach. We work not only on the strengths but also the weaknesses, the paralyzed parts.

I felt at traditional physical therapy, my therapist was working on all my strengths but not my weaknesses. So it’s definitely a different approach. … As founder of Journey Forward, my goal is to continue opening these centers all across the country, because there’s just not enough out there.

I really believe that 10 years from now, you’ll see a lot more places like this and a different outlook on spinal cord injury. These days, if you have a spinal cord injury, you’re done. They throw you in a wheelchair, pump you with medicines and say you’re never going to walk again. And I’m living proof that that’s not true, that recovery is possible.

Is time spent at the center covered by clients’ health insurance?

We’re not a medical facility, so we’re not covered by insurance. We are in the process of trying to put all that together and try to somehow get insurance to at least cover a percentage of this. There are some hurdles we would have to overcome, but we’re working on it. … We’re hoping to get insurance to cover this or raise so much money that we can start client scholarships, so everybody can afford this program.

How do you help your clients with the mental part of the recovery process?

That’s probably where I come in. I’ll talk to clients, and a lot of clients come in here and ask me advice – how did you do this, how did you do that. I just talk to them, and I tell them. It’s been nine years for me, and I stress that to them. I didn’t take my first steps until 6½ years after I broke my neck. Patience is a virtue, and it’s mostly mental. There are times that maybe you feel like you just want to give up, and you’ve got to keep going. You hit plateaus.

I’ve hit three or four plateaus a year, where I’m making progress, making progress, then all of a sudden, nothing. Now I’m not able to do what I was doing a couple weeks ago; you go up and down through the recovery process. And you’ve just got to stay mentally strong to get yourself through those.

How long do most clients attend the program?

We opened up … (in January 2008), and we still have most of our clients. It doesn’t happen overnight. It’s a long process, and it’s a game of inches. It’s been almost nine years for me, and I’m still working at it and I’m still improving. I walk with a walker right now, but my ultimate goal is to get rid of that walker in the end. That could take three, four, five, six more years, I don’t know. But as long as I take one day at a time, I’ll get there.

By Julie Onufrak
The Patriot Ledger