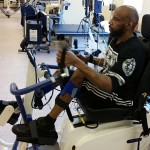 It’s 7:30 a.m. at Magee Riverfront’s Wellness Center and Delano Turnipseed has already broken a sweat on a very unique type of exercise equipment: a seated elliptical machine designed specifically for individuals with leg paralysis. To look at his trim but muscular frame, you would never guess that he once considered himself 60 pounds overweight. A large weight-loss goal like this is typically an uphill battle for a wheelchair user with paraplegia but was no match for Turnipseed’s discipline.

Most people do not realize how difficult it is for someone with a spinal cord injury to lose weight. Most wheelchair users do not burn calories as quickly as ambulatory individuals, and they must reduce their daily calories just to maintain weight, let alone to lose it. Finding accessible exercise equipment is equally challenging. Prior to his spinal cord injury, Turnipseed was able to maintain his weight easily by staying active playing football and basketball and working for UPS.

In 2004 Turnipseed sustained his spinal cord injury from a motorcycle accident, leaving him paralyzed from the chest down. He found his life was changed in many ways, and he was unable to return to his previous job at UPS. For several years that followed, he fought a very serious depression that often comes with a recent spinal cord injury. He reports that he rarely left the house, except to go to the movies or out to a bar to socialize occasionally.

When his friends had a hard time recognizing him in his larger frame, Turnipseed knew that it was time for a serious change. He began to eat healthy again, having a salad for lunch every day and drinking lots of water. He joined Magee Riverfront’s Wellness Center to utilize its wheelchair accessible exercise equipment. He began using Functional Electrical Stimulation (FES) cycles as well as lifting weights and using a standing frame. He began to transform himself into a fit individual. He credits the FES cycle program for weight loss, improved muscle tone, more energy, and decreased depression.

When Magee Riverfront was the first area rehab to obtain an RT200, Turnipseed was first in line to use it regularly. This seated elliptical cycle made by Restorative Therapies is an FES device which uses electric stimulation to actively contract paralyzed muscles to facilitate exercise. The device provides resistance training to his lower body and cardiovascular exercise to his upper body. Using this state of the art equipment, he has reached a high level of fitness which would normally be very difficult in a wheelchair.

Turnipseed’s motivation comes from being a role model as a father. “I never want my kids to see me depressed and sitting around playing video games,” he says. He also acknowledges the responsibility of being able to fit in his wheelchair. He realized quickly how much easier it is transfer from his wheelchair to his bed at his new lighter weight. The new level of fitness gave him the confidence that he needed to return to school for medical management as well as to volunteer at Magee.

Turnipseed’s fitness dreams came true when he received funding for a home elliptical. Because he does not drive yet, he needs to allow 2.5- 3 hours for transportation to and from Magee, a drive that would take him 30 minutes on his own. It makes maintaining his school schedule and household responsibilities challenging. Having the elliptical in his own home will allow him to use it on a daily basis on his own schedule. He promises, “This bike is a gift, and it will not become a coat hanger.”

Since Turnipseed started working out, he has gone from a size 46 to a 36 waist and from a 3x to a size large shirt. He serves as a mentor and inspiration to many wellness clients in our building. I am always proud to introduce him as Magee Wellness Center’s own “Biggest Loser.” He is living proof that fitness with a spinal cord injury is more than possible.

As he says,“Determination and resiliency is what it is all about.”