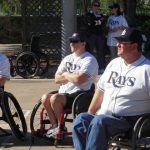 The playing field at the James A. Haley VA Hospital’s Spinal Cord Injury Center in Tampa was truly a field of dreams, April 24, as male and female players in hospital beds, wheelchairs, scooters and gurneys took their positions for a softball exhibition.

The hospital provides specialized services for paralyzed veterans with various degrees of disabilities and the teams were comprised of paraplegics, quadriplegics and amputees.

Each player of the Rays Wheelchair Softball Team sported a “Rays” logo baseball cap and uniform jersey. On-lookers and players totaled about 30, some veterans of the hospital and others community members with disabilities. It was a beautiful day and the game was about to begin.

The first batter had one arm and was paralyzed from the waist down. The ball was pitched and he hit a long drive to the outfield, making it to first base in his power wheelchair before the ball did. During the play, voices came from everywhere, shouting, “Swing batter swing… You can do it… Send the ball to the outfielders… Hit a home run!”

The next batter was a female paraplegic in a sports chair. The ball was pitched and she hit a grounder to the shortstop, a veteran on a red, white and blue gurney. He used a net to grab the grounder and threw it to first base; but failed to send the runner and her sports chair back to the dug-out. The batter celebrated with a 360-degree spin as the crowd went wild.

With first and second bases loaded, a voice cried out, “Play ball!”

The third batter was a quadriplegic in a power wheelchair that supported and raised him to an up-right position. He was not able to use his arms and hands so someone helped him hold the bat.

The crowd became silent and tense. The ball was pitched and he sent it bouncing into center field, where it was bobbled by the outfielders before making it to first. After getting his power chair in gear, the runner moved ever so slowly (because of his chair’s speed) to first base, where he was pronounced safe as loud cheers rocked the area. With bases loaded someone again yelled, “Play ball!”

The next batter was a paraplegic with incredibly muscular arms. His hit sent the ball soaring beyond the outfielders for a grand-slam home run, bringing home the player on third, followed by the female in the sports chair (doing another 360-degree spin at home plate) and the quadriplegic in the power wheelchair and the winning batter. What a game! There were many high-fives, fists-to-fists, light punches, hugs and handshakes… everyone was included… everyone was in high spirits.

Indeed, this softball game was a remarkable experience to witness. I saw disabled people looking after one another, ensuring that each person’s goals were met, treating each with dignity and respect. I witnessed the joy of high emotional spirits, something we all desire. I observed frightened newcomers being drawn into a happy family with similar challenges, proving that it is not about disabilities, but what “abilities” one has. The game was softball, and compassion was the victorious winner.