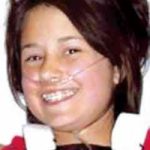 It was a regular Thursday. Durango High School sophomore Alyssa Shelton got up and got ready for school, just as she always did. But the day did not end as it started.

During a track meet at Bayfield High School on April 21, Alyssa, 16, and several of her teammates were sent by their coaches to the school’s soccer practice field to stretch. While accounts differ about how it happened, everyone agrees that the result was horrifying – a soccer goal fell on Alyssa and shattered her L-1 vertebrae, at the base of her spine.

“So many things had to happen at one time for this to happen,” DHS Athletic Director Sheldon Keresey said Monday. “Three other girls were sitting right there with her and weren’t hurt at all.”

Alyssa’s family and doctors at The Children’s Hospital in Denver credit Durango spine surgeon Dr. Jim Youssef for giving the young woman a chance at recovery.

“There was 70 percent impingement on the (spinal) cord,” said the Shelton family’s lawyer, David Downs, “resulting in partial paralysis.”

Two days later, Alyssa was transported to Denver, where she has been for the last month. Her mother and stepfather, Josie and David Latham, have been with her the whole time, while her father and stepmother, Chad and Laura Shelton, have been going up every weekend. The two blended families have three other children to care for, Tiara Shelton, 12, David Latham Jr., 14, and Tyler Latham, 12.

“She’s looking forward to people knowing what’s going on,” her stepmother, Laura Shelton, said. “She’s struggling mentally after being yanked away almost a month ago after just going to school one morning.”

The Sheltons said the doctors can only give them statistics about Alyssa’s prognosis, but no one can predict how well she will heal.

Before the injury, Alyssa was planning to get a summer job and a driver’s license. Now she’s hoping DHS teachers and staff who have volunteered to work with her over the summer will help her stay on track to become a junior in the fall. In addition to running in the 4-by-400-meter relay and cross country, Alyssa is an honors student at DHS. She also is active on the yearbook staff.

On May 14, Alyssa visited track teammates who were competing in the state championships in Denver, which raised her spirits, Keresey said.

She was not yet a star, but Alyssa’s coaches had been impressed by her work ethic, which helped her improve dramatically in the course of just one year, Keresey said. Keresey has visited her twice in Denver.

“It’s tedious, slow, small improvements,” he said. “A lot of drudgery, with therapy six to eight hours a day.”

The therapy goes on seven days a week, with only a slightly shorter schedule on weekends.

“The therapists love to work with her because she works so hard,” Keresey said. “She’s a great inspiration with that attitude and approach.”

Alyssa was not available for an interview because her energy is dedicated to therapy.

Keresey said Alyssa made a major advance last week when she walked around her floor at the hospital with just her leg braces and without crutches. She also has taken a short trip to a mall with her family and a therapist.

Chad Shelton, who just started his business, S & S Lock Service, last July, said his daughter Tiara had suffered a traumatic brain injury three years ago, so this is the second major injury to his children.

“You trust they’re safe,” he said about kids participating in school sports. “You think there might be a broken arm or a blown-out knee – not something like this.”

Keresey knows Alyssa has a long road ahead of her, but he’s an optimist.

They created a computer station — and changed a quadriplegic patient’s...