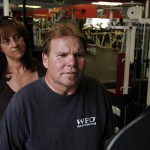 When Tom Bolewski suffered a serious spinal cord injury 16 months ago, his doctors told him he would live out the rest of his life as a quadriplegic in a nursing home.

On Monday, the 49-year-old former electrical contractor from Saugus hopes to take his first steps since the accident at the finish line of the Los Angeles Marathon.

“I was told by several doctors that I would be driving a wheelchair with a straw (from my mouth),” says Bolewski. “I was told I would have permanent brain damage. Obviously, none of that is true.”

Instead, the steps he takes at the L.A. Marathon will mark an incredible journey of recovery to date for Bolewski, his wife, Kim, and their three sons, who all refused to accept the dire prognosis.

On Jan. 20, 2008, while dirt bike riding with family and friends in the California desert, Bolewski was thrown over the handle bars headfirst into an embankment in a fall that devastated his athletic body.

A broken back left him paralyzed. He had a 3-inch skull fracture and was blinded in his right eye by a crushed right orbital socket. Both cheekbones and his sinus cavities collapsed toward his brain, and bilateral torn rotator cuffs left him with his arms barely connected to his shoulders.

“Tom spent six weeks in (the intensive care unit) at the Kern County Medical Center, and he was told he would never get off the ventilator and would have to be transferred directly to a nursing home in West Covina,” recalls Kim, his wife of 25 years.

“He was immobile for almost eight months.”

Bolewski’s recovery, however, took a dramatic turn at the end of 2008, when he began working twice a week with personal trainer Taylor Isaacs, a former kinesiology professor at California State University, Northridge.

Ex-cop among clients
Among Isaacs’ clients is Kristina Ripatti, the former Los Angeles Police Department officer who was paralyzed from the chest down in June 2006, when she was shot on duty and whose recovery has been widely publicized.

Bolewski and Isaacs connected as former athletes. Born and raised in the west San Fernando Valley, Bolewski had been a varsity football and track athlete in the 1970s at Cleveland High School. Isaacs himself had a professional soccer career cut short by a broken ankle that doctors predicted would leave him crippled.

Today, Isaacs walks without a limp, and the rehabilitative regimen he practices is filled with positive thoughts and an incessant stream of aphorisms.

“Fear shuts the body down,” he tells Bolewski during one of their training sessions Thursday at Gold’s Gym in Northridge, as he and Kim struggle to help him stand upright for a minute.

Bolewski almost falls the first time they try, then bravely holds himself up, supported by his wife and trainer, as a handful of people stop their workouts to watch.

Recognizing recovery
More than a dozen of Isaacs’ rehab clients will also be at Monday’s marathon participating in a 1 p.m. ceremony recognizing their recoveries.

“It doesn’t matter if you run or walk 26 miles or walk 26 steps or just take two steps across the finish line, they will still receive their L.A. Marathon medals to show they took part,” says Isaacs, who will be running in the event himself that morning.

Isaacs also believes that Bolewski has already proven to himself that he has beaten the odds the doctors gave him.

“There are too many people who offer the prognosis that he has a one-in-a-million chance of ever walking again,” says Isaacs. “I personally believe, `Let’s forget about the million. Let’s concentrate on the one.”‘

To date, Bolewski has yet to take a single step or stand for much longer than the few moments he did at the gym, but he is confident – as are Isaacs and Kim.

“Those steps he takes at the L.A. Marathon will absolutely be his first steps, and they will be symbolic steps, too,” says Kim. “It will be symbolic of his struggle and his quest and his drive to recover.”