‘Oh my God, they are going to kill someone’ 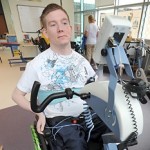 Man struggles to put life together after crash

What they remember most are the sounds.

For Evan Cronhardt, it was the sound of his life changing forever.

For Naval Academy police officer Cpl. Kelly Kuhn,it was the sound that triggered her fears.

On April 10, 2008, Cronhardt, 23, was on his way to a tanning salon when he began the usually mundane task of making a left turn in his Jeep Wrangler from eastbound Quarterfield Road to Landmark Drive in Glen Burnie.

At the same time, William Bolasky, 28, approached the intersection westbound in then-girlfriend Lisa Wise’s Honda Civic. After tailgating a large white Jeep, according to Kuhn, Bolasky switchedlanes just before the intersection. Bolasky was racing another car, Kuhn said. She knew immediately, from the sound, there was trouble ahead.

“It was just one of those weird things. I was coming out of the gym and just by the sound of the cars I knew they were going too fast,” Kuhn said.

“And just by looking at them I thought, ‘Oh my God, they are going to kill someone.’ ”

“I fell on the ground and tried to lift my head and the Jeep fell on top of me at the same time, and I could hear my spinal cord and neck snap. I went numb and like all tingly,” Cronhardt said.

“The whole sound of me getting crushed, I don’t know, I can’t explain it. It just grosses me out every time I think about it.”

According to charging documents and his own testimony to his girlfriend’s insurance company, Bolasky was unlicensed and uninsured at the time. He did have a learner’s permit.

Police determined Cronhardt to be at fault for failing to yield while making a left turn.

“Evan didn’t see anyone in the right-hand lane heading (westbound) and thought he could get by the white Jeep,” Kuhn said. “But the guy in the silver car (Bolasky) was behind the white Jeep, so when (Bolasky) switched to the right lane and sped up at the last second, he didn’t see Evan making the turn, and that would put them both at the point of impact.”

Bolasky was convicted July 1 of taking his girlfriend’s car without permission. He is serving a 120-day sentence at the Ordnance Road Correctional Center in Glen Burnie.

Kuhn said even though she had a clear view of what happened just before the accident and was on the scene immediately afterward, no one took a statement from her. She said she waited around at the scene for more than 30 minutes after being told “hold on” by county police Cpl. C. Dalton – but no one ever asked her, a six-year police veteran, for a statement.

Several weeks after the wreck, police came to obtain a statement that Kuhn submitted to Cronhardt’s insurance company.

“Charges were not brought at the discretion of the officer who took into account the victim and the nature of the offense,” county police spokesman Justin Mulcahy said. “The officer thoroughly investigated the accident and several witness statements were taken.”

Cronhardt said he has yet to be approached for a statement.
The injury

Cronhardt is not totally without fault for his injury. His mother, Jeanie Cronhardt, said he was not wearing a seat belt at the time of the accident.

Cronhardt suffered a C5 burst fracture among about a dozen other bone breaks, which included several vertebrae, the right side of his pelvis and an orbital bone. He is paralyzed from the chest down, and has limited use of his arms and hands.

Cronhardt was in the Maryland Shock Trauma Center in Baltimore for two months before coming home to Severn. It took eight months before he could breathe without assistance.

In shock trauma and at home, Cronhardt suffered through multiple urinary-tract infections and severe nightmares. He needs a catheter for urination and has trouble controlling his own body temperature because he no longer can sweat.

Cronhardt spends a lot of time every week at the Kennedy Krieger Institute in Baltimore. The facility is known for its innovative work with spinal cord injuries. Dr. Albert Recio, Cronhardt’s physician there, says Cronhardt is doing better than most with the same injury.

“He recovered pretty well,” Recio said. “He’s technically a new injury and most who are in his position are on (a) power wheelchair, but because our approach is so aggressive we have improved his core so that he can use a regular wheelchair.”

Recio said the conventional wisdom on spinal cord injuries is that no progress is made after two years of rehabilitation. Recio and his peers at Kennedy Krieger are using repetitive activity below the level of the injury to tap into new channels of communication between Cronhardt’s lower and upper half.

“We want to wake up new tracks (through the spinal cord) below his level of injury,” Recio said.

The problem, Recio said, is the nervous system, unlike muscles, regenerates very slowly.

Peripheral nerves regenerate at one millimeter per day under the best circumstances, and when spinal cords are severed they do not regenerate.

“I always tell my patients that there is hope out there with what we do right now. We may wake up the next day and find that we have found the answer,” he said. “Everyone is excited with stem cells, and who knows? With this research it’s an exciting time.”
Home life

Life at the Cronhardt home has been difficult since the accident. Cronhardt’s mother, Jeanie, had to quit her job as a nurse to give him full-time care.

In October, his father, Keith, was laid off from his job as an electrician. The couple has since cashed out their retirement money, and the family has been scraping by ever since.

“The first six months was like a nightmare,” Jeanie Cronhardt said. “That whole first year, the only time we went outside was for doctor’s appointments and therapy.”

Before the accident, Evan Cronhardt was physically active.

He liked working outside and going to the gym. He was constantly training and hoping to become a police officer.

He still has high hopes. His experience with the legal system has inspired him to become a lawyer.

“Everything for me has been one step forward and two steps back,” Cronhardt said. “But I figure if I work hard I could get a law degree in seven years.”

Cronhardt wants to attend Anne Arundel Community College before going to the University of Baltimore and eventually University of Maryland School of Law.

Cronhardt’s mom says she has no ill feelings toward Bolasky.

“I’m not angry at him because he didn’t mean to hurt Evan,” she said. “Although there were times where you say, ‘You know, I’d like to just go blow him away.’ But really, we just need some help.”
Unresolved cases

There are two other cases pending against Bolasky. Both stem from a stop made when he was allegedly speeding and in possession of a radar detector some months after the tragic wreck in Glen Burnie.

The Cronhardt family also has filed a civil suit against Bolasky, but they have grim prospects of being able to receive any compensation. As of Friday, Bolasky’s Facebook page said he is employed at the Solo Cup Co. in Reisterstown.

In an interview with a lawyer from Nationwide Insurance, Bolasky and Wise, the owner of the Civic, said Bolasky, of Ellicott City, did not have permission to drive the car, effectively absolving Wise and Nationwide from any responsibility.

Bolasky, who still is behind bars at the Ordnance Road facility, could not be reached for comment.

“You can’t squeeze blood from a turnip,” Jeanie Cronhardt said. “We are just in limbo right now.”