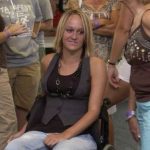 Tara Blackwell finished another workout Thursday at the Andrews Institute. All part of the process.

“I wouldn’t be doing what I’m doing if I lost hope,” Blackwell said.

She wants to walk again.

It’s why she embraces a moment like today when the fifth “TaraFest” is held at the MySpayce Events Center on Garden Street. The event, which will begin at 2 p.m., will feature three bands, food, beverages and prizes as well as an outpouring of community support and friendships.

The benefit goes toward Blackwell’s fund, helping defray medical costs and trips around the globe for procedures in effort to heal her spinal cord.

“There are really no words to describe my appreciation,” Blackwell said. “Sometimes, I’ll ask my friends, ‘Do you get tired of doing this?’ Of course they say, no. But sometimes it’s all that keeps me going, knowing that there are so many people who believe in me and want to stick by me.”

Blackwell’s injury occurred in April 2005 between games of a softball doubleheader in Nashville. Blackwell did an assisted back flip, a move she performed thousands of times as a cheerleader, but this time she landed wrong and sustained the massive spinal cord injury.

A year ago, TaraFest helped fund her trip to Cologne, Germany, one of the places which has ability to perform stem cell procedures.

It involved taking 25 vials of blood from her hip, separating the stem cells from the rest of the blood and reinjecting stem cells into her spinal fluid.

A month later, her mother, Patsy, was moving her in bed. Blackwell felt a sensation in her leg. The next day, more sensations. Now, when she rubs her hand across her thigh, she can feel it. That never happened before. Same with feeling clothes being put on, or the covers on a bed.

It’s a sign the stem cells are trying to work as designed.

In November, Blackwell will head to Costa Rica for another stem cell procedure. This one will involve getting eight injections of umbilical cord stem cells.

“They are very immature cells and when they are injected into the spine, the cells will travel around and the concept is they will find points where the body needs healing,” Blackwell said.

In preparation for that procedure, Blackwell will travel to Baltimore’s Kennedy-Krieger Institute for four weeks of intense therapy at the nation’s renowned center for spinal cord research.

“I will do what I have to do and go where I have to go to get the help I need,” Blackwell said. “My athletic history and what I do every day now is going to make the biggest difference. If I didn’t, there would be no chance.”

Blackwell lives with her parents. She goes to the Andrews Institute twice a week working with an athletic trainer who does all he can to make sure her progress remains on course.

“This is my job, my obligation. I know what it’s going to take.”

Paraplegic man to compete in 10k