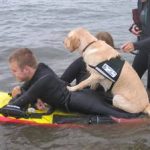 What makes a bad day? Is it missing the bus? Spilling coffee on your new shirt? Leaving your wallet at home?

For Patrick Ivison, who has spent nearly his entire life in a wheelchair, there is no such thing as a bad day. Fifteen-year-old Patrick is the quintessential optimist.

Patrick was only a toddler when he wrangled away from is mom in a grocery store parking lot, and in that split second, a car backed up over him. Doctors told Patrick’s mom Jennifer that her son was paralyzed from the neck down. It was news that could cripple any parent, but Jennifer considered it a blessing, realizing that her son, who narrowly escaped death, had now been given a second chance.

We first learned about Patrick this past winter, when, as a quadriplegic teenager, he had taken up surfing. My producer, Josh Weiner, and I headed out to California to meet this inspirational teen. Once there, two things immediately blew us away. One, the word “can’t” is prohibited in the Ivison household.  It has to be.  How else can you explain how a quadriplegic can learn to water-ski or play rugby or soccer or basketball… from the confines of a wheelchair?  It takes not only all the strength he has, but all the will and courage as well.  And two, we were astounded by Patrick’s appreciation for every single day. To hold such wisdom at age 15 is an absolutely beautiful quality.

Josh and I spent a day at the beach with Patrick, getting to know him and his love of the water. For years he has only been surfing the waves off the San Diego coast in his mind. He envisioned the rush, the pull and the freedom of riding a board through the surf.  And then six years ago, Patrick finally found a way to make that dream a reality. He met Jesse Billauer, a well-known surfer, who also suffered a spinal chord injury. Billauer had started a program called Life Rolls On, a foundation which, among other things, helps kids and young adults with spinal cord injuries surf. Patrick was immediately hooked.  At the time, he was using a special home-made surf board, with ridges made of Styrofoam and duct tape to hold him in place.That, and a team of about 10 friends and helpers, would pull him out into the surf and pitch him to shore. Patrick was surfing. He was happy. He was free.

Josh and I went back to visit Patrick again four months later. Once again, we were surprised. There is no “day off” for Patrick Ivison. He continues to work tirelessly. He has a lot to do, he says, and no guaranteed time to do it in. Between attending school (he’ll be high school sophomore in the fall) and rehabbing at Project Walk, he has his very own Web site —  www.helppatrickwalk.org. Through his site he shares his own story, hoping to inspire others. With the help of family and friends, he’s also hoping to raise money for his rehabilitation. Through poker tournaments and bake sales, the Ivisons do whatever it takes to raise awareness… and to raise funds.

And then there’s Kona, his new service dog. Patrick’s going to need some help if he plans on driving. After all, he’s only a year away from getting his license. Yes, license, and yes, Patrick says he will drive one day! A specially designed car, a lot support from his mom Jennifer and sister Sam, and his new best friend Kona will hopefully make that happen.  Kona is also working now to make Patrick become more independent….helping making his bed, taking off his shoes and soon, accompanying him to school.

Patrick lives everyday with the understanding that he is lucky to be alive, that the little things aren’t worth the hassle, and that the long-term goals, like his ambition of walking across stage at his high school graduation, only makes today that much more important. Tomorrow is not a guarantee, he says, and so, as his favorite song goes, “Live like you were dying.”

Campbellford – Rick Hansen Calls on Trent Hills to Roll for...