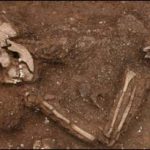 The remains of a man who could be the world’s oldest known paralysis victim have been unearthed by Australian bio-archaeologists in northern Vietnam.

Found at the Neolithic cemetery site of Man Bac, some 100 kilometers (62 miles) south of Hanoi, the remains are between 3,500 and 4,000 years old and belong to an adult male who died around age 25.

Called Man Bac Burial 9, or simply M9, the young man suffered from paraplegia or possibly quadriplegia due to a rare disorder called Klippel-Feil Syndrome, a condition involving congenital fusion of the spine.

The disorder, which can make sufferers look as if they have a short neck, is also often associated with various complications.

In the case of M9, posture-related complications forced his head to tilt to his right side, a condition known as torticollis. M9 also likely had problems chewing.

“Amazingly, this man survived in a subsistence Neolithic economy with total lower body paralysis, and at best minimal upper body mobility for at least a decade prior to death,” Lorna Tilley, the Australian National University Ph.D. candidate who excavated the remains with lead researcher Marc Oxenham, told Discovery News.

Completely immobile below the waist, with radically limited upper body mobility and disabling torticollis, M9 was totally dependent on others for every aspect of daily life.

“He needed intensive nursing, not only for basic needs, such as eating, drinking (and) hygiene, but also for preventing or treating the common complications associated with his condition. We are talking of bed sores, urinary tract and gastrointestinal problems, respiratory problems, thrombosis and pain,” said Tilley, whose research focuses on care-giving in prehistory. 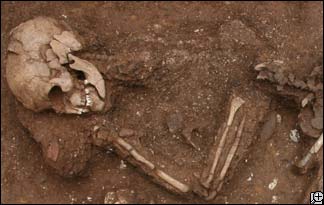 “The consistency and quality of care he received are what kept him alive, and analyzing this care allows us to draw out features of contemporary social practice,” she added.

According to Swiss anatomist and paleopathologist Frank Ruhli, who in the past published the case of a Peruvian mummy believed to be paraplegic due to spinal alterations, the most important aspect of the discovery is the window it provides into the evolution of social support in ancient societies.

“Even if only skeletal remains are preserved — such as in this case of a male individual from Neolitic Asia — one may speculate about the extent of caritative support in a community,” Ruhli, head of the Swiss Mummy Project at the University of Zurich, said.

Indeed, the long-term survival of a man with such a severe disability in a community where almost half died before they turned five opens new questions on the prehistoric motivation for care-giving.

“There has been some speculation on whether support was totally altruistic or whether M9 may have had a particular ability that the community needed,” said Tilley, who is the author of a forthcoming study on the implications of care provision in M9’s Neolithic community.

“Personally, I see no reason to assume that a prehistoric individual who receives care has some special ability. My research suggests that community membership alone is sufficient to explain support,” Tilley said.

WATCH VIDEO: Discovery Health follows one of the world’s top spine surgeons as he faces one of his biggest challenges.