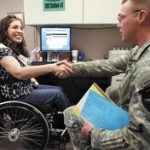 Her dedication to getting on with it – her work as a civilian mobilization and deployment specialist for the U.S. Army, life with a disability, her determination to serve as a role model for others – helped earn the 31-year-old Lakewood woman her state title in February and allowed her to compete for the crown of Ms. Wheelchair America.

“I don’t see myself as a beauty queen,” Saxton said in June. “I see myself as a woman called to make a difference. If that means putting on a sash and a crown, then I’ll do it.”

As Ms. Wheelchair Washington, she has visited soldiers in the spinal cord injury unit at the Seattle V.A. Hospital. She said their courage and the depth of their sacrifice impressed her.

So far, her tenure as Ms. Wheelchair Washington has been a busy one.

Saxton spoke earlier this year to members of TACID – Tacoma Area Coalition for Individuals with Disabilities. In July, she visited Spokane to volunteer at athletic events for paralyzed veterans.

At the national competition in August, she spoke about the philosophy that sustains her. She summarizes it with the acronym ACTION: Achieving Confidence Through Inspiration, Optimism, and Nurturing.

It’s the story of her life.

Born prematurely, she developed cerebral palsy. She was unable to walk until the age of 6, and she wore metal braces on her lower legs. When she was 11, she had spinal cord surgery, and spent a month in the hospital, then a year doing daily therapy.