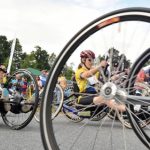 The fourth annual Kelly Brush Century Ride kicked off early on Saturday morning to cool temperatures and thick crowds at Middlebury College, where cyclists in the benefit ride gathered before pedaling off on 25-, 50- or 100-mile routes.

This year, 495 cyclists participated in the ride, which raises money for the Kelly Brush Foundation, which supports spinal cord injury research. The foundation also funds ski racing safety programs and provides adaptive sports equipments to individuals with spinal cord injuries. As of press time, this year’s race has raised a record-breaking $200,000, and officials were still tallying up the last donations.

“We had an inkling that it was going to be good but, boy, that exceeded our upper expectations,” said foundation president and founder Charlie Brush, Kelly Brush’s father.

Kelly Brush, a Charlotte native, sustained a spinal cord injury while racing for the Middlebury College ski team at the Williams College Winter Carnival in February 2006. The horrific skiing accident left Brush, then a sophomore at the college, paralyzed from the rib cage down.

But just a few months later, in the fall of 2006, Brush was back at Middlebury College, navigating the college’s hilly terrain in a wheelchair. And that September, family, friends and members of Brush’s ski team turned out on their bicycles for the first Kelly Brush Century Ride. In what was then her longest outing on a hand cycle, Brush pedaled 10 miles alongside her father.

Since then, the race has grown every year. The event is the main fund-raiser for the foundation, which gives matching grants to ski programs to buy ski racing safety equipment, and which purchases athletic equipment like hand cycles and monoskis for paralyzed individuals. A single hand cycle can cost as much as $5,000.

This year, Kelly Brush said, “everything was bigger.” After raising $135,000 at last year’s ride, the foundation set a goal of $150,000 for this year’s fund-raiser, keeping their hopes in check because of the tough economy.

But more cyclists than ever before showed up on Saturday morning to participate.

Some of the people who have received equipment through the foundation were on hand to pedal alongside Brush. All told, around 30 cyclists used hand cycles in the event. Charlie Brush, who learned to use a hand cycle with his daughter after Kelly’s accident, also used a hand cycle. He was the only cyclist to do so who has the use of his legs.

“It’s really fun,” Brush said. “Going down hills and stuff, we can go pretty darn fast. If I had a choice between (riding) on a hand cycle and a bike at this point, it’s 50-50.”

Most of the hand cyclists participated in the 25-mile ride, and Kelly Brush and her father rode 28 miles together. A few of the hand cyclists rode 50 miles, and one — Jeremy Shortsleeve, who won the Vermont City Marathon hand-cycling division in May — completed the full 100-mile loop. Shortsleeve, who raised more than $2,200, was the third-highest individual fund-raiser at the event.

“He finished in about 10 hours,” said Charlie Brush. “It was phenomenal.”

Shortsleeve and Kelly Brush also rode with a team, Team Ride-On, made up of hand cyclists. Other team members included paralympians Sarah Will and Chris Waddell, who were both paralyzed in ski accidents but went on to ski for the U.S. Disabled Ski Team.

Though the event has grown, some things haven’t changed over the four-year lifespan of the ride. Each year, members of the Middlebury College alpine and Nordic ski teams turn out to support their old teammate and rally behind a good cause. This year, around 30 members of both teams participated, said alpine team Head Coach Stever Bartlett, and the entire team tackled the 100-mile route. Together, they raised nearly $11,000.

“It’s just part of what we do as a ski team to support Kelly,” said Bartlett, who joined his skiers on the road for the ride. “It’s obviously a good way to give back to a sport that’s given so much to the athletes.”

For Kelly Brush — who after her accident learned to ski again on an adaptive monoski, and skied down the giant slalom track at the Middlebury College Winter Carnival in 2008 — learning to cycle and ski after her accident was a way to hold on to her love of sports.

Earlier this year, Brush received the prestigious NCAA Inspiration Award. She went to work for ESPN last year, and, having graduated from Middlebury College, she has enrolled in graduate school at Northeastern University in Boston. She hopes to become a registered nurse in the future, citing the help of nurses and doctors after her skiing accident as her inspiration for helping others.

For Kelly Brush, who said she hopes the event just continues to grow in the future, the highlight of Saturday’s ride came after the event, when cyclists gathered for a barbeque.

“I think the end of the day, during the barbecue, is the most fun,” she said. “Everybody has done their ride. I feel great about what I accomplish. No matter how far you ride, it’s a big accomplishment.”