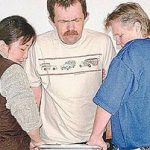 IN THE two years since a bizarre motel fall left him with a terrifying spinal cord injury, Maryborough’s Peter Edwards never gave up.

With an unyielding, positive attitude the 42-year-old – diagnosed as a quadriplegic – defied medical odds to rise up and walk again.

“My doctors told me I was one of the most determined patients they’d seen,” Mr Edwards said Sunday.

“What doesn’t kill you makes you stronger.”

That’s Peter’s mantra for life after he got trapped in the bed sheet in a Brisbane motel at 3.30 on a 2007 morning, fell into a cupboard, cracked his head, wrecked his spinal cord – and didn’t play in a ten pin tournament that day.

“Well, actually everything went pear-shaped,” said the former Wide Bay Transit cleaner, and petrol head when it comes to the big rigs he admits he will probably never drive again.

“But there’s no way I’m ever going to give up and that’s why I’ve started standing up and even walking a bit again.

“I did 20 steps today. Nothing in this world will ever stop me from trying.

The miracle man who spent nine weeks in an intensive care unit, followed by nine months in Brisbane’s Princess Alexandra Hospital spinal injuries unit, spoke out yesterday in support of the Spinal Injuries Association, who, he says, have helped him all along the way.

“Peter’s extremely fortunate that he has been able to regain some movement in his legs as he did not sustain a complete break of the spinal cord. Unfortunately, the majority of people who sustain a spinal cord injury will never be able to walk again.

“The spinal cord is the width of a finger and has the consistency of a banana and, once it’s damaged, it’s virtually impossible to reverse that damage.

“And because there is currently no cure for a spinal cord injury, prevention of these types of injuries is paramount.”

“The accident was a sort of, things do happen in life occurrence,” Mr Edwards said.

“It was 3.30 in the morning and I wanted to go to the toilet so I was disorientated and fell out of bed.

“Since then I’ve been working non-stop to try and regain some movement in my legs.”

As Peter’s injury was incomplete and did not entirely damage the spinal cord, this means with intensive physiotherapy, he can now walk a short distance, with the assistance of a walking frame.

Five mornings a week Peter has personal care assistants from the Spinal Injuries Association assist him to remain independent in his own home.

“My PCAs have also supported me with my physio exercises and they’ve been extremely encouraging in helping me achieve my goal of walking again,” he said.

As well as daily exercises at home, Peter also spends each Tuesday morning at the Maryborough Hospital, practising on a 10-metre bar much the same as ballet dancers use.

“Since my accident I’ve stayed positive and focused.

“When I was in the spinal injuries unit, my doctors told me I was one of the most determined patients they’d seen, so I’d like to stay that way.

“My accident was devastating but it’s made me appreciate my life much more – you just never know what can go wrong.”

Mr Edwards’ friends and family have kept his enthusiasm levels high throughout the past few years but it is his wife who has been his biggest motivator.

Describing the last several years as challenging was an understatement, Julie Edwards said.

“But Peter’s improvements have made us start planning for the future again.

“Peter’s been applying for jobs, so we’re hoping he’ll be able to get back into the workforce again soon,” she said.

The Spinal Injuries Association is a not-for-profit organisation dedicated to assisting and empowering its 2000 members and clients throughout Queensland.

Covid-19 and Spinal Cord Injury: Staying well is the slogan of...