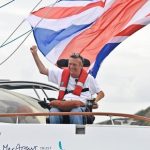 Returning to where his life changed some 25 years ago, Geoff Holt who became quadriplegic following an accident at the Cane Garden Bay beach in 1984 has described the visit as a breathtaking experience.

The 43 year old British yachtsman who arrived on Tortola last Thursday has become the first quadriplegic to sail across the Atlantic Ocean.

In an interview with BVI Platinum News on Friday, an emotional Holt said that he sailed the 2,700 mile journey across the Atlantic on a 60ft purpose built catamaran “Impossible Dream” where he was unassisted.

“The boat is fully designed for someone in a wheel chair and it is fully accessible. When I decided to sail across the Atlantic on my own, it made absolute sense to come back to Tortola where my life changed. When I was 18 years old I was working in the BVI and I went to the Cane Garden Bay beach. I was running from the sand into the water, what you would call diving, not scuba diving…and there is where I hit my head and broke my neck causing a complete spinal cord injury. Before my accident, sailing was my livelihood,” Holt told BVI Platinum News.

This is the fourth time Geoff has sailed the Atlantic, but the first since his life changing accident in 1984 which left him paralysed from the chest down.

On Thursday after weeks of sailing, Holt reunited with his wife Elaine and seven year old son Timothy who were waiting for him on Tortola.

When asked if he has any sad recollections after returning here, Holt said, “I know many persons would want to know that, but to be honest it was a celebration to be back. I am not saying that I am glad to be paralysed, but if it wasn´t for that accident I would not have met my wife who was my nurse at the hospital and then there is my son. This sailing is not a sad reflection. Sometimes your life change, but when life throws a lemon at you, make lemonade. Not because you are disabled it means you cannot live your dream”.

He also spoke of the great reception he received. “Yesterday (Thursday) when I sailed in to Cane Garden Bay, apparently persons were told before to come out of the water and that I was coming. I can tell you the reception was so wonderful – everyone was standing at the side of the beach cheering for me. It was a wonderful feeling. There were also a reception held for me and a great welcome by the Governor and the Deputy Premier.”

A cocktail party was held for him at Pusser´s on Thursday evening and on Saturday a fundraising dinner will be held at Myett´s, featuring lots of local music.

Holt said that the owner of the boat who is also paralysed, will be in the BVI on Thursday evening and the boat will remain here for the next three weeks. However, Holt and his family will be departing the BVI shortly via airplane.

For more information on Holt you can visit his website at www.geoffholt.com

Patients with paralysis learn how to scuba dive at the Kennedy...