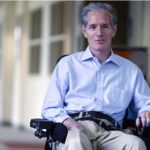 Riding his bicycle on a hilltop near his Canandaigua home May 30, Dr. Bradford Berk didn’t see any cars coming along the narrow North Vine Valley Road.

But rounding a sharp curve, he suddenly encountered an oncoming car “quite a bit over in my side of the lane,” said Berk, speaking publicly Thursday for the first time since he suffered a spinal cord injury. Berk is still on leave from his post as chief of the University of Rochester Medical Center.

The car forced him off the pavement, said Berk. “When I got off the road, my bicycle tire blew. As I continued to pedal, I ended up going over the handlebars.”

The driver of the car immediately came over and — not yet realizing that Berk was unable to move — said, “Did I surprise you?”

Berk’s reply: “I think I’ve broken my neck, so please don’t touch me.” Berk, who never blacked out, asked the elderly man whether he had a cell phone and asked him to call 911.

“Indeed,” said Berk with a wry laugh, “I was surprised by that car.”

Berk — usually a fast-talking, brisk-walking executive known for his multi-tasking and impatience — told the story calmly from a motorized wheelchair. He hasn’t worn a watch since the accident. He’s focused on regaining as much strength and ability as he can.

The cardiologist once spent long work days directing the medical center, running his lab in the Aab Cardiovascular Research Institute and seeing patients.

Berk praised his care, but said his perspective as a patient has shown him places for improvement. Health care workers haven’t been honored and rewarded as much as they should, he said.

He expects to go home this month — perhaps a month earlier than the typical six-month stay for a spinal cord injury patient — and continue outpatient rehab for months. He continues to make progress and hopes to eventually walk normally again. So far, he has walked haltingly with assistance, using a platform walker on which he supports himself with his elbows and forearms. He hopes to progress to a regular walker and then to a cane over the next several months.

“Just after the accident, I was totally paralyzed,” said Berk. “The only thing I could move was my head.”

A Yates County sheriff’s deputy arrived on the scene within minutes and a Middlesex ambulance soon after. Mercy Flight airlifted him to Strong Memorial Hospital. Berk was in the emergency room within an hour of his injury. He was on a ventilator, unable to move, communicating by blinking.

“That’s a terrifying experience,” he said. “You can’t imagine what it’s like.” He feared the future, imagining himself in the condition of the late actor Christopher Reeve after Reeve’s spinal cord injury.

Berk underwent neurosurgery to stabilize his spine — fractured in the third cervical vertebra — and spent 12 days in Strong’s Kessler Family Burn/Trauma intensive care unit, fed by a tube in his stomach. He then spent three months in rehab at Kessler Institute for Rehabilitation’s spinal cord injury center in New Jersey, where Reeve was once a patient. Berk said he regularly questioned the medical director and the staff about his care, such as why they were doing things one way instead of another. “It was an enormous learning experience,” he said. He sees great possibilities for the fields of rehabilitative medicine and regenerative medicine.

Most of the roughly 50 spinal cord injury patients with him in New Jersey were young adults who hadn’t yet started families or established themselves in a career, so Berk, who’s 55, said their injuries seemed more devastating.

“I had an enormous support system,” said Berk, crediting his extended family, colleagues and thousands of encouraging e-mails and cards from the community. His daughter, Sarah, is planning to run in the New York City marathon Nov. 1 in her father’s honor as part of the Christopher Reeve team, and she has raised more than $13,000 so far for the spinal cord injury cause. Reeve’s son Matthew, 29, also is running the marathon for his first time.

Berk returned to Rochester nearly two weeks ago. Dr. Mark Taubman will remain acting chief of the medical center until Berk is able to work full-time. The two have stayed in close contact, and Berk’s transition plan is to spend mornings in an office next to Taubman and afternoons in rehab.

Berk’s legs are strong but his arms are still affected by the injury. The right-handed Berk is using his left hand to eat and drive his wheelchair. Berk wiggled the fingers of his right hand and said that just last Friday, he regained enough biceps strength and control to lift his right arm from his lap to the armrest of his wheelchair. He can use his computer by using a mouse modified with a cradle to hold his finger in place. He’s working with occupational therapists to regain the use of his Blackberry, wearing a device on his hand to help him punch the tiny keys. Physical therapy has helped him strengthen his core muscles so he can sit straight.

Berk said he’s fortunate that his injury wasn’t more severe, that he was in good physical shape when it occurred, and that good care has helped him avoid medical complications such as pneumonia or even a bed sore.

“I hope for a complete recovery,” he said. Doctors can’t predict his future but are pleased with his progress.

After speaking to reporters, Berk drove his wheelchair back to his inpatient room, to applause from colleagues and others he passed in the hospital lobby.