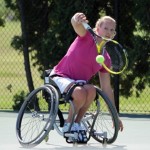 ST. LOUIS • It still bothers Robin Ammerlaan when he has to take his eye off the tennis ball.

Ammerlaan, 43, played tennis for 15 years with what he calls an “able body” before surgery for spina bifida left him unable to walk. For the last 14 years, he’s played from a wheelchair.

The newer game still requires swift movement. In a wheelchair, that means turning your back on your opponent.

“When you’re able-bodied,” he continued, “you always look at the ball.”

Ammerlaan, of the Netherlands, was one of about 125 players from around the world in St. Louis competing in the 2011 U.S. Open USTA Wheelchair Championships at the Dwight Davis Tennis Center in Forest Park from Tuesday to Sunday. Many use the tourney as a tuneup for the U.S. Open Grand Slam tournament in New York, which begins this week.

One of the tournament’s most renowned champions is Esther Vergeer, a Dutch player who lost the use of her legs after spinal cord surgery when she was 8.

Now 30, Vergeer has won five gold medals at the Paralympic Games and 18 grand-slam singles titles, and is on a 424-match win streak that dates to 2003. Four of those wins were from St. Louis, where she ended Sunday as the women’s open champion.

Other players have similarly remarkable stories.

Pat Mulvihill, 61, lost both his legs after “running over a booby-trap” during his second tour of duty in Vietnam in 1970. After eight months of recovery, Mulvihill said he took on any challenge put before him.

“I was 20 years old when I got hurt,” he said Sunday after losing a consolation match with his doubles partner, Glenn Singletary. “I was just glad to be alive.”

When a friend invited him to play wheelchair doubles in 1983, he jumped.

“I said tell me when, where and what time,” said Mulvihill. “And that was the beginning of it.

Mulvihill, who has ranked as high as No. 2 in singles in his division, said the game showed him how easy it was for the body to redistribute its strength.

David Wagner has used a wheelchair since 1995, when he broke his neck while playing Frisbee at the beach. Now 37, he’s one of the top-ranked quadriplegic wheelchair singles players

Wagner said he has learned a lot from other wheelchair athletes throughout his travels — and not just about improving his tennis game. He credits them, for example, with showing him better ways to get in and out of cars.

“You can only learn so much from an able-bodied physical therapist,” he said.

Ammerlaan, who won the men’s open Sunday after current world No. 1 Shingo Kunieda pulled out of the match with an injury, has won four singles grand slams, eight doubles slams and two Paralympic Games golds.

He said playing a sport with other disabled people has been better than therapy.

BY MARLON A. WALKER