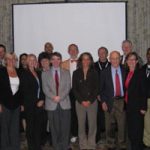 NOA, which stands for Neurological Outcomes Assessments, is a group of international experts who are collaborating to develop, test and validate new improved outcome measures for use in human clinical trials of spinal cord injury. Twenty NOA members participated in-person; several more joined via web conference.

Led by NACTN Principal Investigators Drs. Robert G. Grossman (Methodist Hospital), Susan Harkema (University of Louisville) and James Guest (University of Miami), the Task Force agreed to pursue two categories of outcome instruments:
(1) those with the potential to be ready for use in clinical trials in 2010, and
(2) those that will take longer to develop and validate but have strong potential for accuracy and reliability.

The Task Force agreed upon outcome areas and the specific tests within each to be developed; project leaders for each test were identified. The broad outcome areas are autonomic, motor, pain and sensory, and quality of life.

Each team is now charged with preparing descriptions of the targeted tests in each outcome area (for example, in the autonomic category, the tests to be developed include cardiovascular, voiding and sexual health), proposed protocols for their use and budgets for the protocol development and validation studies. Once the entire Task Force has reviewed and finalized all proposals, individual teams will move into the development phase as quickly as possible.

NOA is an extremely important initiative of the Reeve Foundation. It is possible that future clinical trials will fail to identify potentially effective treatments without reliable and sensitive measures that can detect small incremental changes in patients.