Spinal injuries up among troops 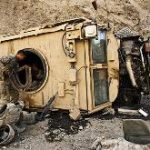 Doctors at the U.S. military hospital here say more than 100 U.S. servicemembers have suffered crushed or damaged spinal columns from being thrown around inside armored Mine Resistant Ambush Protected (MRAP) vehicles in the last five months.

This “significant increase” in spinal injuries was not seen in the Iraq war, says Air Force Col. Warren Dorlac, director of trauma care for both conflicts. One in five wounded service members evacuated from Afghanistan this summer and early fall suffered a spinal injury and at least 14 were left paralyzed or with loss of sensation, says Air Force Lt. Col. Dustin Zierold, a surgeon and the hospital’s director of trauma care.

“Whatever the G-force (of the roadside bombs), it is very high and very destructive,” Zierold says.

Medical officials here are concerned about whether seating, harnesses and flooring in MRAPs adequately absorb the force of blasts, Zierold says. He says a doctor in Kandahar is trying to design a seat that would guard against spinal injuries.

More research is needed to improve seating and flooring designs, said Marine Brig. Gen. Michael Brogan, director of the Pentagon’s MRAP program. “In future vehicles, that will be the key to survivability,” he says.

The MRAPs are the military’s chief response to the No. 1 killer of U.S. troops in Iraq and now in Afghanistan — roadside bombs. More than 3,500 of the $1.4 million vehicles are in Afghanistan. Brogan said that insurgents are building larger bombs to overcome the MRAP’s armor and the V-shaped hull, which carries the force of an explosion away from the center of the vehicle.

In Afghanistan, fewer paved roads make it easier for insurgents to bury large explosives that can launch these heavy vehicles several feet into the air, Army commanders and doctors say.

Doctors here are gathering data matching spinal injuries with vehicle types, position of the occupant, surgical treatment that followed, incidence of paralysis and other factors. They are giving the data to engineers to help improve designs, Zierold says.

Air Force Reserve Col. Paul Dwan, a neurosurgeon here, held up his forefinger and thumb in the shape of a flattened letter “C” illustrating how the service member’s back is affected by the blast inside the MRAP. “They getting clammed up, they’re getting scrunched down,” Dwan says. Insurgents are ” using bigger IEDs (improvised explosive devices). We’re seeing the nature of the injuries change.”

The back injury is “like bending a stick by pushing at both ends toward the middle,” Zierold says. “The stick first bends, then will break.”

In addition to spinal injuries, physical damage often includes shattered bones in the feet and ankles, and a concussion from the servicemember’s head hitting the MRAP ceiling, say Dwan and Zierold. In some cases, soldiers and Marines are being blown out of their harnesses by the blast.

Brogan says MRAPS have saved countless lives, but as bombs get bigger, unanticipated problems arise. He says that improved seating, harnesses and flooring can mitigate the bomb affect to some degree. But, “eventually armor loses. … You can only build so much defense and eventually, with enough explosive, it can be overcome.”

A Quadriplegic Woman Used Her Mind To Move This Robotic Limb...