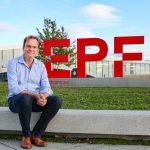 “Salamanders are unique because they are one of the only tetrapods able to regrow spinal cords with full functionality,” says Auke Ijspeert, the head of EPFL’s Biorobotics Laboratory. After an injury, these amphibians are able to “magically” regrow their spinal cords and regain locomotion.

A team of scientists led by Ijspeert along with András Simon, a professor at the Karolinska Institute in Sweden, and Dimitri Ryczko, an assistant professor at the Université de Sherbrooke’s laboratory of motor control in Canada, is looking into exactly how the process works through a project that has just received a Synergy Grant from the European Research Council.

The scientists plan to combine methods from genomics, neuroscience, computer modeling and biorobotics to decipher the neural mechanisms underpinning spinal-cord regeneration. “A salamander’s nervous system has all the same functional elements as that of a mammal, but in a relatively simplified structure,” says Ryczko. “That makes salamanders the ideal animals for studying motor control networks in vertebrates.”

Their research also aims to better understand how the central and peripheral nervous systems interact during locomotion. “The spinal cord is part of the central nervous system, serving as the control room for locomotion,” says Ijspeert. Scientists had already observed how neural networks in an isolated spinal cord oscillate on their own and provide the right commands for movement. “That’s surprising because it means the spinal cord automatically knows what signals it should send to muscles to regulate their movement, without needing input from the rest of the body.” But the spinal cord is not alone in the control room. The peripheral nervous system is also there, transmitting sensory information about the body’s surroundings to the central nervous system and participating to movement control. The research team believes that this redundancy, along with the physical interaction between a salamander’s body and its surroundings, plays an important role in the process of functional recovery.

The benefits of cross-disciplinary research

To test their hypothesis, the scientists will combine their know-how in their respective fields. Ryczko will draw on his knowledge of the biological mechanisms of motor control to study how neural networks are structured. He will use optogenetics – a method that involves making neurons more sensitive to light and then stimulating specific types of neural cells – to measure neuron activity before and after a spinal cord injury. Simon, an expert in neural regeneration, has characterized the salamander genome; he will supply the optogenetic tools needed for Ryczko’s work and examine the molecular proprieties of regenerated neural networks.

Finally, Ijspeert and his team will develop computer models of the neural networks and provide biorobotics expertise so that the models can be tested not just through simulations, but also on an enhanced version of the Pleurobot robot salamander. “We will create a sort of tactile skin for the robot,” says Ijspeert. “Since it’s difficult to model the interactions of a salamander’s body with its surroundings – sand, water, mud, etc. – we will replicate them with the robot. That will show us how the animal’s surroundings affect its locomotion and provide valuable insight into the body’s interactions with the nervous system.”

Simon adds: “Salamanders are the only vertebrates that have both the locomotor circuit of a tetrapod and the ability to regenerate neurons. The evolutionary position of salamanders gives us a unique opportunity to bridge discoveries made in regenerative but legless vertebrates, such as fish, and non-regenerative, terrestrial mammals.”

Although this project focuses mainly on fundamental research, Ijspeert still sees potential applications in his field. “We hope that one day the concepts of robust mechanisms and regeneration can be transferred to robotics, so that engineers can build fault-tolerant machines that keep on working despite damages to their electronic and mechanical hardware,” he says.

A Daring Course of Treatment