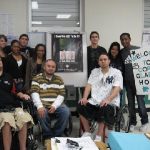 Jumping out of a tree or riding a motorcycle without a helmet aren’t the only bad decisions that can turn into a spinal cord injury.

There’s also texting while driving and not wearing a seat belt.

This was the message that locals with spinal cord injuries were hoping to send as they spoke about awareness at various local schools.

Gebauer, 31, became a quadriplegic at 16 after he jumped out of a tree and landed in a canal. He told his story about how it has changed his life and warned students to be careful of their decisions.

“Spinal cord injuries can take place on a day-to-day basis. You don’t have to jump out a tree to sustain a spinal cord injury,” Gebauer told a group of high school students.

The local also warned of the dangers of texting while driving, not wearing seat belts, driving under the influence, skiing and drag racing.

“There are so many ways that spinal cord injuries can happen,” said Gebauer, who also answered questions from the students about the disability and how it affects his everyday life.

Alex Lutin, 31 of Coral Springs, also spoke about how becoming a paraplegic changed his life. He became a paraplegic at 26 after getting into a motorcycle accident.

“I got injured while riding my motorcycle. I was wearing all the protective gear, but when you ride a motorcycle you know the risks you take every time you get on that motorcycle. I thought because I fell a few times I would never get hurt really bad, but I was wrong. I am trying to get these young high school kids to think about this before getting on a bike. There is also driving under the influence of alcohol or drugs, texting and driving, and the dangerous of playing with guns,” said Lutin. “It just takes one second to make a decision and so many things can go wrong.”

Both locals believe the awareness week was an “eye opener” for many local students.

“The students were definitely impacted, and I hope it sent a powerful message,” said Lutin.

Gebauer and Lutin hope to speak again about spinal cord injuries throughout the school year, especially before Spring Break and prom.

“We hope to continue to get the message across throughout the school year,” said Gebauer.

For more information or if you would like the locals to speak at your school, contact Ryan Gebauer at 954-696-7204.