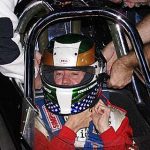 The car accident that damaged Patrick Rummerfield’s spinal cord in 1974 should have laid him up permanently.

So why does he now drive drag racers in Texas, race drag boats on Creve Coeur Lake, break land speed records on the Bonneville Salt Flats, run marathons across Antarctica or run endurance races across the Gobi Desert in China?

Because to keep moving, he must keep moving. And his accomplishments spread the word that spinal cord injury is no longer the end of living.

“There’s hope,” Rummerfield said. “It doesn’t matter what the challenge is if you’re truly willing to go after it.”

“I had to go out and work for it,” he said. “I put in thousands and thousands of hours in rehab to get my body to where it’s at.”

Rummerfield is the world’s only known fully functional quadriplegic. The auto accident damaged 85 percent of the spinal cord in his neck. Ten percent is enough to disable a person.

His paralysis is below his knees; he has to watch his feet when he walks or runs competitively.

He calls his method of meeting challenges active-based restoration therapy — stay active and fit, and the brain can reroute connections around damaged nerves.

Rummerfield’s success confirmed a lot of research that believed the more active a person, the more likely that person’s brain will be to reconnect with the body.

“Pat’s condition . . . teaches us about what is doable,” said Dr. John McDonald, director of the International Center for Spinal Cord Injury at Kennedy Krieger Institute in Baltimore. “A cure is not necessary just partial repair.

“Physical activity accomplishes this, maintains the physical aspects of the body, and offsets complications that limit recovery,” he said.

He added that for Rummerfield, “It is certainly the (physical) activity, but having an indefatigable attitude contributes also.”

Rummerfield knows firsthand the value of being active.

“If I don’t exercise, I feel it (paralysis) coming back,” Rummerfield said.

Every day, he spends two hours on a recumbent bicycle and lifts weights.

He just started bass guitar lessons to improve the dexterity in his fingers.

His day job, working half the month in Baltimore at Kennedy Krieger and the other half traveling as a speaker and fundraiser, also helps him meet other people with spinal cord injury.

He finds and inspiration in telling of his adventures, for example running in endurance races.

He regularly finishes last, but competing is the triumph, he said.

In the marathon in Antarctica in 1996, he fell during the race and broke a leg. He finished in 6.5 hours. “I got chased by seals, some (bird) kept trying to take the ball from the top of my hat,” he said. “It’s scary when you get to a drink station and the water is frozen.”

He was so far behind, “… When I got to the finish line, everyone was back on the boat.”

Then, there was the Gobi Desert race, in 2006, when he also finished last after seven days of racing, finishing with a broken foot.

When he raced in the American Drag Racing League’s World Finals in Ennis, Texas, the league gave Rummerfield tickets to sell and the money went to spinal cord research. A major triumph, he finished second to last. “I was ahead of somebody,” he laughed.

Dr. Gadget Enterprises of TV fame sponsored Rummerfield’s car and donates money when someone clicks on the link to the drag racing site.

The next big fundraising challenge will be next year when Rummerfield and another team of adventurers take 100 people up Kilimanjaro in Tanzania.

“Anything I can do to encourage people with challenges, I’m willing to do it.”