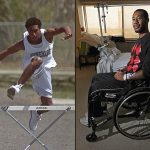 It all happened in a horrifying split second and, three months later, Anthony Lue still can’t quite believe it.

Lue’s voice cracks as he recounts the events of a bizarre and near fatal industrial accident that has left him in a wheelchair, paralyzed from the waist down.

The dreams of the 21-year-old former Pickering High School student are in tatters. There was a time when he aspired to major league baseball, or even compete for Canada in the hurdles at the Olympics. In high school, he was a multi-sport star and an athlete of the year.

With his parents and family at his bedside daily, he was treated at first at Sunnybrook Health Sciences Centre and now at the Lyndhurst Centre, a facility known for spinal cord rehabilitation.

The memories of the accident, that saw Lue crushed inside a car at a recycling facility, are still horrifyingly raw to him.

“It’s a miracle that I’m still talking about this,” he said. “A few more inches and, well, I wouldn’t be here.”

Lue had been working as a mechanical apprentice at Auto Boyz, a specialty car repair shop, which delivered scrap vehicles for recycling.

On the day of the accident, he had driven a 1989 Oldsmobile from the shop to nearby K and K Recycling Company. While he was in still in the car, it was pushed on to a scale used to weigh vehicles for scrap metal.

Something then went horribly wrong.

An overhead crane operator, presuming no one was in the vehicle, began to crush it.

Nino Baggieri, owner of Auto Boyz, was standing nearby as the accident happened.

“The crane, it’s like a six foot disk in diameter and weighs around 20 tons, swung around and hit the car on an angle,” recalled Baggieri. “If it had dropped straight down, he’d be dead. Then another crane, with jaws, lifted the car.”

“There was miss-communication somewhere,” recalled Lue, who said he was conscious but couldn’t recall for how long. “He dropped a big magnet and it crushed the passenger side. Then the car was picked up and someone had said that I was still in it. The car was dropped enough to make an impact.”

At first, the damage Lue suffered appeared minimal; he only had a minor cut on his finger. But he couldn’t feel his legs.

After being airlifted to Sunnybrook, Lue underwent surgery to stabilize his back.

He had sustained a broken back, a fractured neck, broken ribs and spinal cord damage.

“They said I’ll be in a wheelchair forever,” said Lue.

“But they don’t know me, my desire, and with all the medical research, I don’t give up that easy. It sucks what happened to me, and it may have been an accident, but I’m not one to hold grudges and I have a new life to live.”

His mother Marcia had been picking up a daughter when she received a cell phone call urging her to get to her son’s job location.

“Everyone was frantic when I got there,” she said. “A firefighter said he was alive, but I didn’t realize that they were talking about my son. In the hospital, he knew I was there but he was traumatized. I can’t forget that car … it was crushed and I thought how close he came to brain damage.”

“Doctors said it was horrific, we were lucky and he would never walk again. But I told them that one day they will see a miracle and he will walk.”

The Ontario Ministry of Labour is investigating the accident and K and K Recycling president Kevin Morgan was not available for comment.

“It’s an absolute tragedy what happened and (K and K) hasn’t admitted liability,” said lawyer Jason Singer, who has been in contact with the Labour Ministry and the Workplace Safety and Insurance Board of Ontario.

“(Anthony) will need attendant care, home modification and more to care for him. I know we hear of miraculous stories, but it’s too early to tell now.”

Baggieri said Lue came to his firm 11 months ago looking for an opportunity to work.

“A great kid, very ambitious and wanting to learn,” he said.

Lue had a fondness for cars, but he was also quite the athlete.

An outfielder with the Pickering high school team that won the Blue Jays-sponsored Prentice Cup, he also was a defensive back with the school’s football team that won a Metro Bowl.

But it was his performance on the track that had coach Cyril Sahadath beaming.

In 2004, Lue set a provincial record in the junior boys’ 100 metre hurdles and had a partial scholarship offer from Graceland University in Lamoni, Iowa. Nursing an injury at the time, he chose instead to work – while completing his studies at Durham Alternative School in Oshawa – and save up enough money to help with his university education.

“He excelled in sports, he was a gamer and was always on the go,” recalled Sahadath. “What happened was devastating, people were shocked, but (Lue) has this relentless passion to do well and I believe will be the next Rick Hansen because he’s that type of person.”

When Hansen was 15-years-old, he sustained a spinal cord injury as a result of a car accident that left him paralyzed from the waist down. The Rick Hansen Foundation has raised more than $200 million for projects, awareness and research.