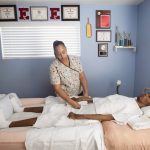 Only the start of a football game bothers Kenneth Jennings, who blows into a tube and turns his wheelchair away from the action. Once the kickoff’s over, his eyes are glued to the field.

It was while he was returning a kickoff for Simeon High as a lightning-quick junior in 1988 that he suffered a catastrophic spinal cord injury and lost all use of his extremities below the neck.

It would have been understandable if the injury had caused Jennings to turn his back on football, but that was never a consideration.

“I love football,” Jennings said. “I love having an opportunity to coach these kids.” He is a volunteer assistant, coaching defensive linemen at Brooks High School after several years at Hubbard High.

Rocky Clark, another former star who was paralyzed while playing for Blue Island Eisenhower High in 2000, also coaches — running backs and defensive backs at his alma mater — and, like Jennings, has no problem watching video of the plays that altered his life.

They both could be considered models for life after paralysis and now are helping others injured in the game they love.

They have teamed up with Rob Komosa, of Rolling Meadows, and Steve Herbst, of Palatine, both suffering paralysis in football-related injuries, to form a new charitable organization called the Gridiron Warriors Alliance.

The group provides emotional and spiritual support and is raising money to offer financial support to injured players who need immediate relief while waiting for an insurance or legal settlement.

“Every time you hear about it happening to someone else, it takes you back to the day it happened to you,” Jennings said. “You know what they are feeling like, what they are going through, the struggles they are going to face. Knowing all that, how can you not want to help to make their lives easier to deal with?”

The National Center for Catastrophic Sport Injury Research at the University of North Carolina studied catastrophic spinal cord injuries from 1977 to 2006 and found 222 in junior high and high school athletes, 33 in college, 9 in the pros and semi-pros and 5 in sandlot players.

The former athletes of the alliance have started a jersey-framing business, with colleges and private high schools as their target customers, and they’re a presence at many Bears home games, raffling off items donated by the team and individual players.

The plan is to reach out to victims of paralysis throughout the country, and other goals are to forge partnerships with NFL teams and to form chapters of the alliance in all NFL cities. A scholarship fund for spinal-cord injured athletes is another goal.

“What I want to do is go to the NFL owners meeting (in the spring) and present my case,” Jennings said. “I’d like to ask teams to give us $100,000 to $150,000 every year. That would be $3.2 million to our foundation. That would be everything we need for the programs we want to have, and it’s a drop in the bucket for the NFL.

“We are not talking about putting money in people’s hands. We want to do things that will last a lifetime,” he said, such as modifying the home of an injured athlete and acquiring a wheelchair-accessible van. “You need to be able to get around the house and to be able to get out and go places.

“I’ve been to Florida, Texas, Ohio. My brother went to college in Ohio, and I was there so much people thought I went to school there. You’ve got to get out. If you can’t see the world, you’re not trying to be part of it.”

Jennings was mentored by former NFL receiver Darryl Stingley, who was paralyzed in a game in 1978. Jennings calls Stingley “a father figure, a best friend, a confidant, an everything-you-could-ask-for,” and before Stingley died at age 55 in 2007, he told Jennings to continue to do for others what Stingley did for him.

In helping raise funds for Clark in 2000, Jennings met Deacon Don Grossnickle, who became involved in the cause after Komosa’s injury in 1999 and is an instrumental part of the Gridiron Warriors Alliance. They all helped Travis Hearn, of Rock Island, when Hearn became paralyzed in 2006. Hearn’s death in December 2008 was the catalyst for the alliance.

“Last year we lost a kid over the simplest thing: a generator in his home in case the power went out,” Jennings said. “He breathed through a respirator, the power went out and he didn’t have a generator. I vowed to myself that I can’t see that happen again. He should still be enjoying life, and he’s not here because of a $300 generator.”

Like Jennings, Clark remains upbeat. A rapidly depleting $5 million insurance settlement has taken care of his medical expenses, but he can’t work, and his mother quit her job to take care of him.

Still, Clark does plenty on his own. In addition to coaching and doing one-on-one speed training with football and track athletes, Clark draws computer-generated pictures using a pointer in his mouth. His bedroom is filled with pictures he drew before and after his injury. A potential Division 1 football recruit, Clark planned to study art in college.

“Ken was a big influence on me in terms of telling me about his situation and what I should expect, but there is only so much people can say to you,” Clark said. “It is up to you. Life is what you make of it. When you are independent, you are used to doing things yourself. That was one of the most difficult things for me to get used to. But life doesn’t always do what we expect. Things happen and we have to deal with it.”

Neither Jennings nor Clark relies on a respirator to breathe, but Clark finds himself in the hospital a couple of times a year with pneumonia.

“My lung fills up on the right side and I don’t have a productive cough, so it sits there and turns into pneumonia,” he said.

Though many quadriplegics die within 10 years of their injury because of lung and/or kidney failure, Jennings remains healthy and vibrant, his smile and conversation easy and his knowledge-base wide.

He lives alone in the South Side house the city donated to him after his injury. The state sends a caretaker five hours a day, and friends and family visit often, but he is largely self-reliant.

“Early on, I had bouts with pneumonia, but as I’ve gotten older I’ve learned more about my body and haven’t had to deal with it as much,” said Jennings, who has medical insurance through the survivor benefits he receives because his father served in the armed forces. “To me, I have no limitations. I was going to be a vegetable. That was the original diagnosis. All I was supposed to do was blink.

“I could have been dead and gone a long time ago. The Lord kept me on this Earth for a reason.”

By Mike Helfgot
Special to the Tribune

Road back to stage is slow but inspiring for Terry Earp