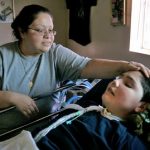 As an unemployed single mother with four children, Maria Rodriguez already has a tough life. But it’s been even tougher lately.

The old van Rodriguez relies on to transport her 15-year-old son, a quadriplegic, broke down — the transmission, the air bags, the motor for the ramp. Then the home she was renting was foreclosed, and she had to move. The security deposit for a new place in Escondido ate up her savings.

The events might have ruined her family’s Christmas. But help has arrived — from people who understand.

Yesterday, the Rodriguez family was inundated with boxes and bags of donated goods and cash gathered by Can’t Keep Me Down, a foundation created by Bobby DuCharme of Mira Mesa, a quadriplegic who broke his neck in a surfing accident in 1999. DuCharme’s family filled the Rodriguez living room with a 51-inch television, clothing, linens, blankets, toys, games and holiday decorations.

Last week, the Del Mar-based HeadNorth Foundation, founded by Eric Northbrook, who was paralyzed in a motorcycle accident, provided the Rodriguez family with furniture, a Christmas tree and more gifts.

“We’ve been blessed with amazing, amazing people in our lives,” said Rodriguez, whose children range from 5 to 16.

Saul Mendoza, her second-oldest, was severely injured May 1, 2008, when he was hit by two cars at an Escondido intersection while riding his bike. The first car stopped, but the second didn’t.

Saul’s right leg was so badly mangled, it had to be amputated at the knee. He was in a coma. His kidney shut down. Doctors didn’t think he was going to make it and told his mother that if he were to survive, he would never see, talk, hear or understand what goes on around him.

Instead, he pulled through with his mind sound and went off dialysis three months later.

After exhausting her family-leave benefits, Rodriguez quit her job as a court clerk to care for Saul. He was due to be released from the hospital, but she didn’t have a van to transport him. So she contacted HeadNorth, and the foundation immediately provided her with $1,000, installed a ramp at her house and got her a van.

HeadNorth is also paying for Saul’s rehabilitation to help him get off a ventilator. After four months of therapy, he is now able to take five or six breaths on his own and hold his head up for a couple of minutes.

He is back in school, excelling at San Pasqual High, where he is a freshman.

Saul smiled yesterday when DuCharme’s mother, Lori Boyters, presented him with a T-shirt celebrating his favorite Mexican soccer team, the Chivas, and a corkboard covered with gift cards and $20 bills and checks. Employees at Cubic Transportation Systems in Kearny Mesa responded enthusiastically to Boyters’ call for donations.

“I didn’t think we were going to have a Christmas because we just moved into a new house,” Saul said, as he recorded a thank-you video message for the donors.

He is fighting a cold, and his left leg is in a cast. He broke the leg recently when it shot out during a spasm and got caught in a door at school. But even with the latest setback, Saul has kept his sense of humor. He joked that shoe stores should give him a discount — because he only needs one shoe.

Randal Schober, executive director of HeadNorth, said 80 to 100 people in the region incur spinal cord injuries every year, and many of the victims are youngsters like Saul because of Southern California’s active lifestyle.

HeadNorth works closely with Scripps Health and Sharp HealthCare to reach out to patients and offer them financial assistance and peer support. The foundation also funds medical research.

Northbrook, an executive with real estate firm Cushman & Wakefield, founded HeadNorth “once he discovered that very little assistance is given to people with spinal cord injury,” Schober said.

“He realized the need for a foundation to help people with the transition, to financially help people, because the cost is very expensive,” Schober said.

Even though she makes a good living as a technical writer, Boyters said, it’s difficult sometimes to make ends meet. At the beginning, she had to file for bankruptcy.

Although they are not well-off, mother and son, who are devout Christians, are determined to provide whatever help they can to other families coping with spinal cord injuries.

DuCharme said when he was floating in the water after his surfing accident, he asked God for help.

“God heard me and sent lifeguards like angels,” he said.

The experience transformed him.

DuCharme was 22, and a promising amateur surfer, when he broke his neck riding the waves in Coronado. He had planned for a life as a pro surfer.

In the early days when DuCharme was still coming to grips with being a quadriplegic, there were days when he wanted to ride his wheelchair off the cliff and kill himself, he said. Now he finds joy in helping other people, living for God and making surf films with footage provided by surfers. His film company is called Paralyzed Productions.

The name of his foundation, Can’t Keep Me Down, is taken from a 45-minute documentary of the same name about his life.

Boyters spends much of her time outside work raising money and collecting goods for those in need, with the help of her network of friends and family.

She was recently named volunteer of the year at Qualcomm, where she works. She donated the $2,000 award she received to the foundation to help Saul and other families.

Boyters has deep empathy for those with spinal-cord injuries and their families. The injured often fight depression constantly, and their loved ones have to learn how to keep them physically, mentally and spiritually well.

“There is so much, you can’t imagine — the day-to-day stuff you have to go through in order to live,” she said.

Despite her circumstances, Rodriguez remains optimistic about her son’s future. Saul feels pain in his leg and arms, and she hopes that he could regain a measure of motor control.

“He has his days, his moments where he says, ‘I can’t do this any more,’ ” Rodriguez said.

But mother and son talk and Saul ends up offering his mother inspiration to go on.

HOW YOU CAN HELP

Learn more about Can’t Keep Me Down at cantkeepmedown.org, and about HeadNorth Foundation at headnorth.org.

Why evict patients who need help?