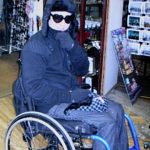 A young man left paralysed by a crash which killed his girlfriend and best friend has learned to walk again thanks to “miracle” surgery.

Aaron Timms, 22, was told he had a less than one in 10 chance of regaining movement in his legs. But neurosurgeon Karoly David and his team at Queen’s Hospital in Romford put him on the path to recovery by repairing his broken back, “repositioning” and freeing his spinal cord.

The mechanic, from Colchester, was the only survivor of the car crash on 23 September 2008. Paralysed from the waist down, Mr Timms was first taken to Colchester General Hospital then airlifted to Queen’s from the accident site in West Bergholt.

Mr David, who trained in Hungary, said doctors thought Mr Timms would never walk again because he had extensive damage to his nervous system and had lost spinal fluid.

He said: “When Aaron arrived, he couldn’t move at all. In these cases there is only a seven per cent chance the patient can walk again. This is because of the compression on the spinal cord. The surgery is very delicate and complex.

“But because he’s young, Aaron had a better chance of recovery. He was one of the lucky ones.”

Scans revealed that the impact of the crash had forced his spine to “dislocate” at the point where the upper and lower back meet. This was placing pressure on his spinal cord – the nerve tissue normally protected by the spine itself.

Doctors decided to “decompress” the spinal cord using complicated surgery to realign the spine. The operation included placing titanium rods above, below and either side of his spine and holding them in place with screws inserted into his vertebrae.

These permanent rods enable the spinal cord to recover slowly from injury.

Mr Timms spent three weeks at Queen’s after his operation, then was transferred to Stoke Mandeville Hospital for specialist rehabilitation. At first he relied on a frame to move, then was eventually able to step out unaided.

It took six weeks after his operation for Mr Timms to regain some feeling in his legs. He is now looking forward to the future after months of intensive therapy. After his experience, he has decided to switch careers and retrain as a physiotherapist.

He said: “Mr David did an incredible job. But we still didn’t know what the outcome would be at first.

“I could feel a little pulse in a muscle in my leg. People were worried that I might be imagining it but I knew it was there.”

Rick Hansen: We can all be difference-makers in the world

‘Pushups for Paralysis’ Challenge for Those Paralyzed from Spinal Cord Injuries;...