Florence woman shot by husband vows, ‘I will walk again’ 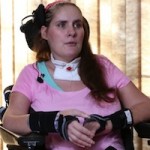 FLORENCE, Ky. – Alisha Waters’ estranged husband tracked her down, shot her five times and then turned the gun on himself.

The Aug. 6 shooting left her paralyzed.

Alisha’s life will never be the same, but after months of rehab in Atlanta, she’s glad to be home.

Sitting in her wheelchair, she talked about bravely facing her new reality and her reason for fighting to live.

Alisha had just arrived at work when her estranged husband, Dennis Mathis, came out of hiding, holding a gun.

“I remember everything,” said Alisha. “I remember turning around, seeing him standing there with a gun pointed at me.

“The next thing I know, he started firing.”

Alisha was lying in the elevator doorway with the door banging against her.

“He fired one more shot and I remember looking back and seeing him put the gun to his head.

“I put my head down and the next thing I knew the medics were there.”

Mathis had threatened her before, Alisha said. He had texted and called her more than 187 times in three weeks.

“A lot of cyberstalking,” she said.

Alisha had gone to court for a protective order, but a judge refused because cyberstalking is not grounds for a domestic violence order in Kentucky.

The order would have prevented Mathis from buying a gun at a gun store the day before he shot her.

Alisha said Mathis wasn’t taking his depression medication. But she still said she never imagined he would do what he did.

Her mom, Tammy Russell, has not left her side during her two months of rehab and, now that she’s back home, her parents are transforming their garage into a room for Alisha.

“I don’t think, unless you live it, nobody has any idea how much is involved in taking care of a quadriplegic,” Tammy said.

Alisha may be a quadriplegic now but, she vowed, not forever.

How does she stay so positive?

“Because I’m here for a reason,” Alisha said. “God gave me a reason to stay, and I’m going to prove to others that I will start my life over.

“I will walk again one day.”

Alisha and her parents are hoping to create the Alisha Waters Law. They want domestic violence laws changed to include cyberstalking.

You can donate to a fund for Alisha’s medical expenses at GoFundMe.com.

Rick Hansen set to re-enact his Man in Motion journey