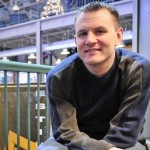 Keith Shirk is animated when he talks.

His face is expressive. He gestures frequently with his hands. He’s come light-years since the June 2001 accident that that paralyzed him from the chest down.

“At first, in the hospital,” he says, “all I could do was lift my left shoulder.” Now, nine years after he dove into the Ocean City, Md., surf and hit his head on a sandbar, he’s checked off many of the goals he set for himself.

He started driving a Chevrolet Express van with hand controls about two years ago, and he’s long since supplanted his heavy, motorized wheelchair with a manual version for most everyday use.

Still, he says candidly, there are hard days.

The spinal cord injury derailed his architecture studies at Syracuse University and altered his perception of himself as a snowboarder and drummer.

“I have had trouble” replacing those identity features, he says, and he still doesn’t get out as much as he’d like. “There’s a lot of things that I miss. I loved backpacking. I did a lot of kayaking.”

“I do stuff on my own” for therapy, says Shirk, who recently started lifting weights using a customized machine at the Lancaster YMCA.

Progress is charted slowly and steadily, he says. “It’s pretty hard to see it living day to day, but I have come a long way.”

Background: Shirk, 27, lives with his parents, Dave and Sue, and 14-year-old brother, Erik, in Manheim Township. He is a 2000 graduate of Manheim Township High School, where he continues to be a marching band staff member.

My computer-aided design job at Buchart Horn involves: Working in the environmental group, primarily on wastewater treatment plants and sanitary sewer systems. We can pretty much design all aspects of a project.

Favorite foods: There’s so many I can’t narrow it down. Yes, I do eat Spam. I get picked on by my family but I love it.

Favorite books: I’m reading the latest Dan Brown book. I read James Patterson a lot, too. I never really was much of a reader before the accident. It allows me to escape a little bit.

Bands I like: Emery and Tool and Before Their Eyes. Music is a big part of my life. I’m coming up with the design of a product that will allow me to play the bass drum.

Exercise: When the weather’s good I try to get out and push a couple of miles a day around the neighborhood.

A challenge I face: The injury doesn’t bother me anymore. But the fact that a lot of people don’t know how to react to people in wheelchairs can be stressful.

A lot of times people will see me doing stuff and they think that I need help, which is fine. But what we don’t want is to be treated like we’re some kind of alien species. You never know what the actual limitations of a person are because everyone’s different.

A place to get away: My father’s side of the family has a lake house in Maine. We’ve gone up there pretty much every year since I was hurt.

I love to travel. At Syracuse, our fifth year was going to be abroad and I was looking forward to that. But air travel … for people in wheelchairs is extremely difficult. I’ve heard of guys not only losing their luggage but losing their chair.

Places I would love to visit: Dubai. They just built the world’s tallest building there. I also want to see Athens.

Three words to describe me: Hardworking, friendly and a realist.

One thing people might be surprised to know about me: I am an Eagle Scout.

One thing I’ve learned: Not to take things for granted. I was just as guilty as anyone else. All the things I took for granted were taken away from me in a split second.

By JON RUTTER
Jon Rutter is a staff writer for the Sunday News.