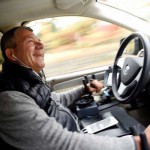 Luigi Girotto has always sought out a challenge, the trademark of his active lifestyle.

As a triathlete, scuba diver, skier and full-time jewelry consultant, Girotto was always up to something, and when he felt his jewelry career had grown stagnant in his small village in Italy, he picked up and moved to New York City.

“I was 40 years old and I had a career crisis,” Girotto said. “Nothing was challenging me enough.”

So in 2008 when a skiing accident in Austria left him paralyzed from the chest down, he didn’t view it as the end of his active lifestyle. Instead, it was just another challenge.

“My life was too easy,” Girotto said. “God just wanted me to have a more challenging life … it wasn’t a crazy accident. I was an expert in skiing, and it was the last day of vacation, the car was packed and we were getting ready to go. I went down the baby slope and crashed 10 feet from the car. It was a simple accident most people walk away from. So that’s how I know, God just wanted me to have a challenge.”

As a quadriplegic with a cervical spinal injury, some parts of Girotto’s life actually haven’t changed much. He still commutes five days a week by train from his home in Rye, N.Y., to Manhattan where he continues his career as a jewelry consultant, and he’s no less determined to lead an active life.

Though he hasn’t been back on the slopes, Girotto, 52, has found a new leisure activity: as an Uber driver in Connecticut.

One of the biggest obstacles Girotto discovered upon starting a new life in a wheelchair was the ability to leave the house. In the summer, there were fewer problems: motorized wheelchairs work well on nicely paved sidewalks, and public transportation in New York and Connecticut is accessible and easy to use, Girotto said.

But for those who don’t want to live by a bus schedule or wheel around in a snowstorm — the options for accomplishing simple tasks like running errands, going to a restaurant and visiting the dentist are few.

Services like Premier Transportation, which provide rides in an ambulette van to medical appointments, airport transportation or other needs, require advance planning and cost upwards of $300 per ride.

According to Disabled World, more than 6.8 million Americans use assistance to help with mobility. Of those, 1.7 million ride wheelchairs or scooters to get around, and 80 percent of wheelchair users say public transportation is difficult to use or access, and many transportation businesses aren’t wheelchair friendly.

Additionally, 20-30 percent of people who have a long-term disability also suffer from depression, according to the Christopher and Dana Reeve Foundation Paralysis Resource Center, which cited loss of independence among the most-cited contributing factors.

“You can’t understand it until it happens,” Girotto said. “There’s a lot of limitations you don’t realize … you can be organized, but it’s still very expensive and difficult, so a lot of people living in a wheelchair just stay home and they have a lot of sadness.“

When the accident first occurred, and he’d lost use of his arms below his biceps, Girotto thought he’d never be able to drive again. But when one of his friends, also a quadriplegic, told him it was possible, he found a new quest.

Consulting, doctors, physical therapists and spinal injury experts, Girotto learned he could possibly drive a modified vehicle. The test that would determine it? Being able to touch his nose.

Girotto then found a company specializing in vehicular modification that had a location in Mamaroneck.

Bussani Mobility — started in 1974 by John Bussani after sustaining an injury in military combat — customized Girotto’s 2010 Volkswagen Routan with an electronic brake and throttle operated by hand and a remote-control steering wheel. Four years after his accident, Girotto was driving independently again.

“I loved to drive before the injury and I like to be busy,” Girotto said. “… I missed that so work was the go-to place for me for being busy after the injury. This allows me to go out on the weekends and drive around.”

Girotto signed up to be an Uber Connecticut driver in 2014, and started providing rides in Greenwich and Stamford. He met all the qualifications — a valid driver’s license, a qualified vehicle with registration and insurance, a clean background check and a good driving record. The process was so simple that if Girotto hadn’t sought out the leadership at Uber, they may never have known about his disability.

Girotto’s vehicle has a ramp and ample space for anyone who struggles to get around. Unfortunately, there’s currently no way through the Uber app to indicate special transportation needs.

Matt Powers, general manager for Uber Connecticut, said providing more accessible transportation is something the company hopes to do.

“It’s something we’ve been aware there’s a need for,” Powers said. “To my knowledge Luigi is the only driver with a vehicle like this. We can’t offer an option for people to choose if we don’t have enough drivers to provide it.”

Even so, Powers said the company looking at ways to expand services for people with special needs and is open to partnerships with companies like Bussani to help people access modified vehicles.

Uber, which has more than 160,000 drivers and 8 million users nationwide, recently added features in its app to accommodate hearing impaired drivers and passengers, as well as visually impaired customers. The company also has a program to help people get regular vehicles up to snuff, a program Powers said has the potential to be expanded for modified transportation.

But the path to accessibility for companies like Uber and its competitor, Lyft, hasn’t always been a smooth one. Both companies are facing lawsuits — in California, Texas and Arizona — alleging drivers discriminate against people with folding wheelchairs and seeing-eye dogs.

As a result, advocacy groups across the country are demanding accessibility and affordability for the transportation needs of the diabled, and Girotto counts himself among those just trying to make a difference.

“I’m pretty feisty,” Girotto said. “This is my mission.“

Reaching her goal one step at a time