Gift of the great outdoors 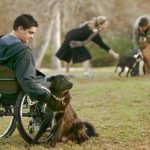 SOLANA BEACH — Allen McKinley didn’t want to be treated like an invalid after he was paralyzed in a motorcycle accident at age 24. At one point, he even cut the handles off his wheelchair because “I got sick of people trying to push me around,” he said.

McKinley, known as Bucky, was a semipro snowboarder in Colorado. The motorcycle accident left him paralyzed from the chest down, unable to do activities he loved.

Now 31, McKinley spends much of his time working with rehabilitation specialists at Awakenings Health Institute, a nonprofit in Solana Beach that specializes in spinal-cord injury. Living in a part of the world known for its outdoor activities, McKinley gets frustrated because he can’t use his wheelchair on the beach, in the mountains or anywhere else off the beaten path.

Two of his friends, James Hellems and Jamie Getzwiller, recently launched a fundraising drive to buy a $20,000 “TankChair,” which would give McKinley more freedom to enjoy the outdoors.

They found the custom, off-road wheelchair on the Internet and immediately knew it would be perfect for McKinley. With 21-inch wheels, high-torque motors and the ability to ascend a 45-degree slope, it can climb stairs and conquer streams, mud, snow, sand and gravel, according to the manufacturer.

“Every time I hear Bucky talk about how he wishes to go for a walk on the beach or visit the trails in the woods again, my heart sinks,” Getzwiller said. “This gift is about giving the outdoors back to him without any limitations.”

The chairs are made and sold by Brad Soden of Arizona, who invented them for his wife, who is paralyzed.

In about two months, Hellems and Getzwiller have raised $3,000 in donations through Awakenings. They created a Web site, tankchair4bucky.com, to help them reach more donors. Donations are tax-deductible.

Laura Karch-Capitelli, the executive director and founder of Awakenings, said the TankChair would help McKinley build confidence and spend more time with his friends.

“I want Allen to have this TankChair so badly so he can enjoy these simple pleasures in life again,” Karch-Capitelli said. “He has an unusual drive in life, zest for life and it makes him one of the most determined people I know.”

McKinley said he had never heard of a TankChair before his friends brought up the subject. Learning about it, he grew more excited. He realized that he could use it for everyday activities, such as taking out his service dog, a female 2½-year-old German shepherd-border collie he calls Murph.

“It would just be really awesome to take Murph and run on the beach,” McKinley said. “I love being outdoors … all those trails and fire roads. If I could just go up and hike them, it would be amazing.”

He dreams of returning to the farm in Iowa where he grew up, and “pheasant hunting with my old man.”

McKinley grew up in Wisconsin and Iowa. In his late teens, he moved to Colorado and took up snowboarding, finding a job at a ski resort.

McKinley was paralyzed April 1, 2002, when he wrecked his Suzuki Bandit in an accident on a mountain road while heading home from snowboarding.

“It was really windy, and I should have left the bike, but I didn’t and now I pay the price for that decision daily,” McKinley said. “The wind blew me into the median in which a large rock got in the way of my bike.”

He said that after his motorcycle hit the rock he remained conscious and, “I knew instantly I was paralyzed.”

“After I got paralyzed they said: ‘Learn to live the rest of your life in a wheelchair,’ and I thought that sucked,” McKinley said.

These days, he keeps busy volunteering at Rady Children’s Hospital and as a stand-up comic — or, in his case, a sit-down comic, he said. He performs occasionally at The Comedy Store in La Jolla. He is the director of sales for Getzwiller’s yoga-accessories company, Yoga Paws, and for a company that manufactures wheelchair parts.

McKinley works out daily with therapists at Awakenings. Mastering everyday movements like sitting up by himself are milestones.

“I have gotten stronger and my body has gotten better,” he said. “And someday I am sure I will walk again.”