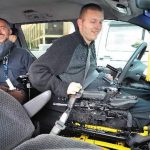 Jesse Gifford knows all too well how Matt Thomas feels these days.

Thomas has been confined to a wheelchair since July, when a mountain bike accident left him paralyzed. Gifford suffered a similar paralyzing injury almost 13 years ago after a diving accident.

“Your whole world is shattered,” Gifford recalled. “You don’t know what you’re going to be able to do or whether you’ll be able to provide for yourself at all.”

Physical therapist Leslie Black asked Gifford, one of her former patients, to get together with Thomas to show him that a spinal cord injury isn’t the end of life. Black often recruits her former patients to visit with new patients who arelearning to cope with disabling injuries.

“Even though I’ve had a lot of experience working with people with spinal cord injuries, I don’t have one myself,” Black said. “I think there’s a lot of benefit in having someone who deals with it day by day be a mentor or a sounding board.”

Gifford, 31, recently drove his specially modified van to Providence Medford Medical Center to give Thomas, 35, some sense of what someone can do, even with a spinal cord injury.

Right now, as much as anything, Thomas misses his freedom to just get in the car and go.

“It sucks not being able to drive,” he said. “I’m the equivalent of a high school freshman.”

Thomas, who worked as an engineer before his accident, quizzed Gifford about the adaptive components of his rig. Gifford showed him how his wheelchair locks into the floor and demonstrated the throttle and brake controls for his left hand and the adaptations to the steering wheel that allow him to steer with his right hand.

“What hand do you use (for the phone)?” Thomas asked.

Gifford and Thomas both have what medical professionals call “complete” spinal cord injuries, meaning they have no sensation or movement below the injury site. They have some use of their arms, but very limited grip strength.

“You’re really lost at first when you have an injury like this,” Gifford said, as Thomas and Black worked through a therapy session. “It’s good to show (newly disabled people) there’s hope. It’s good for me, too. It makes me realize how much I’ve done.”

Gifford, who lives in Eagle Point, recalled Black telling him after his injury that he would be driving on his own again someday.

“I looked at her like she was crazy,” he said.

Gifford did much more than learn to drive. He earned a degree in computer science at Southern Oregon University and now works as a Web designer.

“Even now I’m still learning how to do things,” he said. “I’m still finding out what I’m capable of.”

Black said she tries to match former and current patients who have similar backgrounds, education, life experience or age.

“You can’t connect people just because they happen to be in wheelchairs,” she said. “I do think about personalities. People have to have some kind of commonality.”

Gifford and Thomas were both athletes. Gifford played high school football and ran for the track team. Thomas was a kayaker, mountain biker and climber.

Thomas, who lives in Medford, said he plans to return to school to earn a master’s degree in business administration and seek more aggressive physical therapy.

“Seeing Jesse is a paradox,” he said. “It’s helpful to see someone with that level of function. At the same time, it’s a little depressing to see someone paralyzed so long who hasn’t recovered.”

Thomas said he’s still coming to terms with losing the person he was.

“Labor Day a year ago I was on a four-day kayak expedition down a river nobody had ever done before,” he said. “Spending next Labor Day in a wheelchair is a pretty stark comparison.”

Paraplegic dad turns his wheelchair adventures with his six-year-old daughter into...