Waiting for a miracle that could come soon 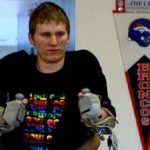 DENVER – Luke Vogel was angry. There is no other way to say it. He had heard people talk about quadriplegics before the accident, but now it was personal.

There he was, sitting in that new wheelchair, wondering what was going to happen to him as he approached the rest of his life.

“I’ve come to terms that this is what it is right now, and it’ll be better to deal with it instead of just being pissed off at everyone,” he said as he worked out at SCI Recovery in north Denver.

Of course, he still wishes for the day he will be able to chuck that wheelchair off a bridge. He just does not think about it quite as much.

“It’s been two years and I’m still not walking,” he said quietly.

Halfway across town on the Anschutz Medical Campus in Aurora, a doctor cannot help but smile when he talks about his work.

“I feel confident in saying that I’d be really disappointed if we didn’t have something within the next five years that is of major benefit to people with spinal cord injuries,” said Dr. Stephen Davies, associate professor in the department of neurosurgery at the University of Colorado School of Medicine.

Davies speaks in a language difficult for the uninitiated to understand. He talks of astrocytes, and axons and neurons. (Click here to learn more about Davies’ research.)

But the moment you start to get that puzzled look on your face he grins, takes a deep breath and talks to you about the possibility of doing something previously thought to be impossible.

He wants to help heal the one part of the body that tends to resist healing. He wants to encourage the nerves in an injured spinal cord to “bridge the gap.”

“For the last century we’ve been trying to understand why nerve fibers don’t regenerate after a severe injury in the spinal cord or brain,” he said.

Most of the blame lands squarely at the feet of scar tissue.

More recently, he started trying to perfect a technique that would actually encourage nerve regeneration across scar tissue. This is where the word “astrocyte” comes into play.

It is complicated, but by placing astrocytes made by using a specific kind of stem cell into the injury site, he can fuel growth across the once impenetrable.

“We’ve seen almost 40 percent efficiency on nerve fiber growth over a spinal cord injury in rats. The previous record was 5 percent,” he said. “What we see is 39 percent of nerve fibers before an injury getting right past that injury.”

“We’re getting amazing results in the lab with rats,” he said. “Now we have to translate those results to humans.”

In a world where five-year promises seem to be made every year, Davies feels pretty confident in saying we may be five years away from “something big.”

It is why he is an advocate for those with spinal cord injuries to try to stay in the best shape possible.

He feels like clinical trials on humans may be “two or three years away.”

It is partially why three times a week, Luke Vogel can be found working out at SCI Recovery. (Click here for more on the SCI Recovery Project.)

Often he can be found on something known as an FES bike. FES stands for Functional Electronic Stimulation.

“It stimulates your muscles, basically shocks them to get them in a pattern to get your legs moving,” he said as his legs spun around and around.

“If there was to be a breakthrough I would be able to support my own weight,” he said.

Vogel remembers the day his life changed forever as if it were yesterday. It was Dec. 11, 2007.

He was at a park in Centennial. Some fresh snow had just fallen. There was a jump he and a friend wanted to try out. Vogel started skiing at the age of 5.

“I went off that jump, and I guess I went off too fast and went farther than I should have,” he said.

When he landed, he tried to get back up.

“Nothing moved,” he said. “Nothing was moving the way I remembered it, and I really couldn’t do much to fix it.”

Carol Vogel remembers the scene at the hospital in painful detail.

“I had a doctor bring me into a private room and tell me, ‘I have something I need to tell you,'” she said. “He honestly sat me down and said, ‘Your son is going to be a quadriplegic’ and I just stared at him.”

Carl Vogel, who helped start Dish Network, decided his personal life had to take precedence at a time like that.

“First and foremost, I’m a dad. And Luke needed me, and I guess I needed him,” he said.

He scaled back from his executive role.

“Those first few days you’re just hoping against all odds that he’ll wiggle a toe or move a leg,” Carl Vogel said.

Two years later, he has become a lot more realistic.

“There’s not going to be a vaccine that you’re going to stick in his arm,” he said.

Carl Vogel is quite familiar with the work of Davies, and he remains a fan of his work, but he is also cautious about getting his hopes up too high.

“I’ve been given a lot of false hope that [a big discovery] would happen within six to eight months. So, I’ve chosen not to get too excited about things like that, because if it doesn’t happen, I’ll just be let down,” he said.

But his dad still has this: “You know, we’d all love to come here one day and have Luke get up and walk to our car, and yeah, that’d be great. Is that going to happen? It may. Miracles do happen.”