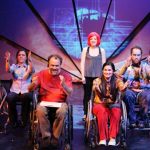 When the cast of a new play plans its positions on a stage, the complicated process of mapping out its moves (known as blocking, and that includes not blocking sightlines for other actors) must allow for consideration of the rake, or angle, of the stage. Try figuring it all out from a wheelchair.

“It’s funny,” says James Sanders, a quadriplegic actor. “The stages aren’t always level, so I find myself trying to figure out where exactly I’m going to be, so my chair doesn’t creep around.”

Where: The Fei and Milton Wong Experimental Theatre at SFU Woodward’s

Tickets: $27 to $37, go to sfuwoodwards.ca or call 604-873-3311
Sanders stars in SPINE, a new work written by Kevin Kerr for the Realwheels Theatre Company and the University of Alberta department of drama. Although he’s now playwright-in-residence at the U of A, Kerr is best known in Vancouver as a co-founder of Electric Company Theatre and winner of a Governor-General’s Award for Unity (1918).

Realwheels has a mandate to create “world-class art that deepens the audience’s understanding of the disability experience.” In 2007, Sanders literally took to the air with actor Bob Frazer for Skydive, which featured acrobatic innovation; now Frazer directs his friend in a play where its wheelchair-bound star steps into a virtual universe.

“Yes, there’s disability in this show,” says Sanders, “and we represent it and speak out about some of the issues. But it’s the landscape upon which universal issues are discussed — questions of identity and questions of what’s real. It just so happens that we have characters with disabilities telling sections of the story.”

Sanders is, unfortunately, the real deal, made quadriplegic in 1990 following a spinal-cord injury. Actress Carmela Sison, meanwhile, is able-bodied but portrays a character recently injured.

“She took the time,” says Sanders of his co-star. “She came to Vancouver over her Christmas break and did research at GF Strong [Rehabilitation Centre]. She met people with recent injuries, she spent over a month using a wheelchair and understanding the physicality, out to the mall and even on the plane, to understand what the perceptions are of people with disabilities.

“I think she did an admirable job of not only capturing the physicality of a person living with a disability, but also the emotional and psychological changes that happen with an injury — mostly from the societal perceptions that people have.”

Sanders portrays a man who hopes to escape his binding wheels by becoming an onscreen avatar — but what happens to the real you when your electronic equivalent is so much more appealing?

With more than a dozen people in the cast and a lot of multimedia elements to deal with, Frazer found his first gig as director far different from what he’s been seeing for years from the other side of the street, as an actor.

“It’s unbelievable to me how much a director does,” Frazer exclaims. “I’ve witnessed it, I’ve watched the directors, but holy cow, they do so much. It’s totally changed my perspective on theatre.”

Frazer and Sanders agree that SPINE was lucky to have a test run in Edmonton before its debut at the Fei and Milton Wong Experimental Theatre in SFU Woodward’s. Frazer and Kerr worked on some major script revisions, trimming about half an hour to bring the production in at about two hours, and scaling back some of the technology so it wouldn’t overwhelm the story.

“I find the theatrical moments ‘way more interesting than the technology moments,” says Frazer. “I think theatre’s getting to a point where we’re pushing the limits of all the technology we can bring into a production, and people are going to start to see that, sure, that’s great, but you still have to tell a story.”

Nevertheless, Frazer is still keen about some of the wizardry taking place.

“The actors can control the music from their bodies,” he reveals. “A lot of the sound is controlled live, on stage, through Bluetooth technology and these interesting Wii remotes that we’ve disassembled and rebuilt to create alien-like things they wear on their sleeves to control sound.”

It’s symbolic of the struggle disabled people face every day that Sanders had a tough time during the Edmonton run of SPINE. Among other things, he had to deal with too much snow and too little accommodation for his needs, forcing him to stay away from the university and call on taxis to travel.

“It’s something that I think really needs to be addressed within theatre in Canada,” says Sanders. “I need an accessible rehearsal space and dressing room, I need a bed to get on and off of when I change in and out of my costumes, and I need the schedule to allow for the extra time that it takes me to get to and from the theatre.”

Happily, he has all of that at SFU Woodward’s for the Vancouver run of SPINE.

“The Wong is extremely accessible,” he notes. “It’s been built with the mandate that any person with a disability can do any job — including hanging a light. Fortunately, I live just a stone’s throw away, so I should be able to just push there.”