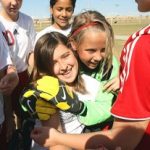 Three months ago, 11-year-old Mackenzie Saunders injured her spinal cord
while playing soccer and was unable to walk.

The times that followed could have been her darkest hours. Instead, her irrepressible attitude has made her a star.

Her pain required three-times-a-day medication. The physical therapy toward getting her to walk might have brought tears to the eyes of someone twice her age.

But Mackenzie’s ability to handle it all, more like a professional athlete than a sixth-grader, began to inspire adults and fellow children alike.

“Here is this young girl who loses her ability to walk, and not a peep of self-doubt or indulging herself with self-pity. Not once,” said David Kovacs, a friend of Mackenzie’s family and manager of her soccer team. “She’s not oblivious to the reality of what she is facing. She just refused to relent to all that.”

From the seat of a child-size wheelchair, the upbeat Ahwatukee Foothills girl charmed Valley soccer clubs, business owners, community groups and complete strangers. Television cameras followed her. Dozens of supporters gathered around her wheelchair for group hugs at soccer games.

Some handed her envelopes stuffed with cash, hoping to help with her staggering medical bills.

Now, she is stunning her doctors, too. On legs still a bit unsteady, she is taking her first steps, walking and kicking a ball – far sooner than expected.

On Thursday, she’ll go on NBC’s “Today Show” to talk about just what it is that has kept her going.

“I’ve learned not to be negative,” Mackenzie said. “If you feel sorry for yourself, you just hold yourself back.”

Mackenzie, a goalie for the Ahwatukee Foothills Soccer Club 98 Girls Sting Red Team, collided with another player during a Dec. 19 game.

Sometime during the collision or the resulting fall on the field, a vertebra in her lower back was broken. The blood supply to her spinal cord was cut off, leaving her unable to move her lower body until she started treatment at Barrow Neurological Institute in Phoenix a week later.

Spinal-cord injuries in children are rare.

Christina Kwasnica, a Barrow physician who has supervised Mackenzie’s care since December, said a spinal-cord injury during a fall in a youth soccer game is virtually unheard of. She said she has been unable to find a case like Mackenzie’s in medical literature.

She is also amazed by Mackenzie’s progress.

“She is doing phenomenally well,” Kwasnica said. “I am very surprised she is walking so well so quickly. Everyone asks when she will be playing soccer again. I think running is coming, but that is still down the road.”

Supporters are moved by Mackenzie’s upbeat philosophy as much as by her recovery.

They have showered her with gift cards, teddy bears, jewelry, a free manicure and pedicure, and offers for things like free athletic coaching and horseback-riding therapy.

Kristen Beauperlant, a Scottsdale manicurist, treated Mackenzie to a free manicure and pedicure after seeing her interviewed on television.

“I invited her to come in because I just wanted to make her feel more beautiful,” Beauperlant said. “I found her so inspiring. She talked a little bit about the accident, but more about how she was getting well.”

Julie Fischer, a family friend, said: “Not once has she said anything negative, and I think that is amazing. I have learned from Mack that life is too short to worry about the little things . . . that positive thinking and energy do make a difference.”

Supporters at Joyful Yoga studio have not even met Mackenzie but still raised $530 for her in fundraisers during January.

“(Mackenzie) has this amazing personality that comes through no matter what she is going through,” said Debra Plunkett, a Joyful Yoga spokeswoman. “It’s inspiring.”

Amid Mackenzie’s public struggle, her parents, Liz and Gary Saunders of Ahwatukee Foothills, have been struggling quietly with mountains of bills not covered by their health insurance.

The community contributions are helpful but likely won’t be enough.

Gary has made a living selling health insurance for the past 25 years. He had read his family policy and believed it would cover any imaginable scenario.

“But we never imagined any of us would be in the hospital for 34 days,” Liz said.

Gary is negotiating with the hospital and his insurance company and has applied for assistance under an insurance program that the Arizona Youth Soccer Association provides players.

He said he is not even close to receiving all the bills yet.

But many that he has received make him nervous, including $12,923 for a pediatric MRI that his insurance company says it will not cover and a $75,000 bill for a hospital room.

Since her discharge, Mackenzie returns to Barrow twice a week for physical therapy. As recently as five years ago, someone with an injury like Mackenzie’s would not have been in such an intensive rehabilitation program, Kwasnica said.

“Even five years ago, we would not have pushed her to walk so quickly,” Kwasnica said. “But there is now a philosophy of getting up and doing as many muscle repetitions as possible, of really working the muscle out.”

Kwasnica said she expects Mackenzie to continue physical therapy for a few more months if arrangements can be worked out. The Saunders’ insurance plan covers only 24 physical-therapy sessions a year, but Barrow is trying to get that number increased, she said.

“We might be limited by what insurance allows,” Kwasnica said.

Marjorie Baldwin, director of the School of Health Management and Policy at Arizona State University’s W.P. Carey School of Business, said the Saunderses’ situation illustrates a little-discussed flaw in the nation’s health-care system.

“Their situation is very, very illuminating,” said Baldwin, who last year was a participant on the White House Health Reform Task Force. “Here is a family that has insurance, but they are still in trouble.” Mackenzie’s supporters say they intend to stick with her until she is well.

Fischer, the family friend, said she has rounded up businesses to do fundraisers and is planning a huge garage sale.

The Saunderses send thank-you notes to donors that include photos of Mackenzie in her soccer uniform.

On each photo, she pens a message: “Think positive! Mackenzie Saunders.”

by Cathryn Creno
The Arizona Republic