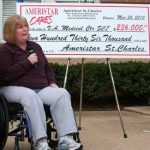 Veterans from Illinois, Missouri and seven other states will benefit from a $236,000 donation given to the Veterans Affairs Spinal Cord Injury Center by the Ameristar Casino.

The donation is the largest received by the St. Louis Veterans Affairs Spinal Cord Injury center, according to Public Affairs Manager Marcena Gunter.

A ceremony was held Wednesday to present the donation to the VA center at the center, located at Jefferson Barracks.

Veterans, including Lt. Col. Helen Horne, a Belleville native, attended the presentation. Horne, who was paralyzed during the Gulf War, spoke at the presentation, Gunter said.

The money from the donation was contributed by a combination of Ameristar Team Members, a company match and a Craig H. Neilsen Foundation match.

The donation will be used for rehabilitation equipment and Access-to-Care program, for veterans traveling from regional states. Veterans travel to the VA SCI center from Illinois, Missouri, Indiana, Iowa, Nebraska, Kansas, Arkansas, Tennessee and Kentucky for physical therapy and other extensive treatments.