Marc Buoniconti, a champion of spinal cord injury awareness, appointed to UM Board of Trustees 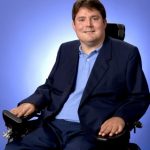 Long-time philanthropist, champion of spinal cord injury awareness, and University of Miami alumnus, Marc Buoniconti has been named to the UM Board of Trustees. Joshua Moore will serve as the student representative on the board, which is responsible for governing the University, one of the largest private research universities in the southeastern United States.

Buoniconti’s tireless efforts in the spinal cord injury arena have brought international attention to The Miami Project and its mission. He has served as a director in the Gloria Estefan Foundation; Points of Light Foundation; and the National Institute of Health, National Advisory Board of the National Center for Medical Rehabilitation Research, among others.

He graduated from UM with a degree in psychology in 1993 and is a member of Iron Arrow, the highest honor bestowed by the University.

Moore is a second-year medical student at the Miller School of Medicine and serves as the president of the Student Government Association at the school.