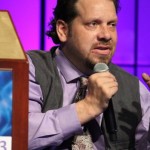 For this blog post, I’m writing about Reed, because he gave arguably the most memorable speech advocating more stem cell research.

A spinal cord injury from a college football accident left Reed mostly paralyzed. He’s recovered use of his arms, but cannot walk. Reed and his father, Don, were among the foremost proponents of Prop. 71, the initiative that set aside $3 billion in bond money to fund stem cell research and disease treatments in California.

Video clips from his speech taken by me at the awards follow. They are shaky in portions, but the words are clear. I’ve prefaced them with a brief description of their contents.

By Reed’s admission, he was on his way to becoming a “dumb jock” when paralyzed. Nearly helpless, he had to choose between surrendering to despair and feeling victimized, and fighting back. Reed choose the latter.

Roman Reed on fighting back
Roman Reed describes how he fought back after being partly paralyzed.

From rats to people?
Who’s jealous of a rat? Patient advocate Roman Reed, that’s who.

Living with hope of a cure keeps Reed going, but he admits it’s a rough struggle. It’s especially rough when seeing someone else suffering, such as a young girl Reed met who’s dying from spinal muscular atrophy.

Who’s the bravest? Roman Reed tells
Roman Reed, paralyzed patient advocate, tells who is the bravest person he has ever met.

Reed liked what Prop. 71 did for stem cell research in California, and labored to clone in in other states. He gained many friends and allies, among them Holly Huber, who has multiple sclerosis. Huber says stem cell treatments have relieved her symptoms.

A quadriplegic patient used prosthetics to feed himself. His brain was...