The rewiring of Tim Raglin 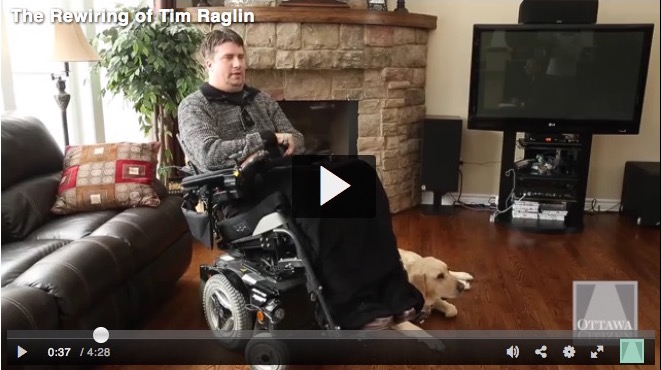 On a bitterly cold morning in late February, a medical team gathers at 7 a.m. on the third floor of The Ottawa Hospital’s Civic Campus to launch what will be an unprecedented day of surgery.

The team’s goal is audacious: to restore movement to the right hand of Tim Raglin, a 44-year-old quadriplegic whose fingers have been frozen in place since August 2007.

During that year’s Civic Holiday long weekend, Raglin, a project manager at an Ottawa high tech firm, dove from the dock of his family’s Round Lake cottage, near Pembroke. The cottage had been in his family for generations; he had made the same plunge hundreds upon hundreds of times.

This time, however, a heat wave and a deep dive combined to produce disaster. Water levels were unusually low in Round Lake that year and Raglin smashed hard into the sandy bottom.

He floated to the surface with a vertebra in his cervical spine shattered to pieces.

Dr. Kirsty Boyd, an Ottawa Hospital plastic surgeon, will be performing the nerve transfer surgery — the first operation of its kind in Canada — under the mentorship of the woman who pioneered the technique at the Washington University School of Medicine in St. Louis, Dr. Susan Mackinnon.