Wheelchair curling at the 2018 Winter Paralympics: All you need to know 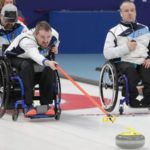 Wheelchair curling made its Paralympic debut in Torino in 2006.

Teams are comprised of male and female athletes who have a physical impairment in the lower half of their body. This can include spinal-cord injuries, cerebral palsy, multiple sclerosis and double-leg amputation.

The team has four players: Lead, second, third and skip, plus an alternate who can come in as a replacement.

The sport is almost identical to the Olympic version but with one key difference – sweeping is not permitted, meaning the delivery of the stones has to be even more precise.

Twelve teams take part in Paralympic competition. The round-robin phase involves each team playing each other once. At the end, the top four teams qualify for the semi-finals. In the event of a tie, there are tie-breaker matches.

Each match is made up of eight ends.

The object is to slide stones with handles across the ice, aiming for them to come to a stop on a target, called the house, which is marked by four concentric circles. The lead delivers the first stone and the play continues with each athlete delivering two stones alternating with the opposing team (16 stones in total). Placing the stone inside the house means earning a possible point.

The team which places the most stones closest to the centre of the house wins the point.

To throw the stone, athletes may use their arms and hands, or their “delivery stick”.

Canada are the defending Paralympic champions but six different countries have won medals in the past three World Championships.

Norway are the reigning world champions after beating Russia 8-3 in the final last March. One of the Norwegian stars is skip Rune Lorentsen who has been part of the team since 2006 but is still to win a Paralympic medal.

The Scottish team were relegated to the B Division in 2015 but earned promotion back to the A Division the following year.

What wheelchair users wish you knew – and what to stop...