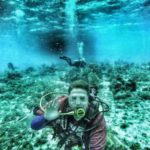 “I never realized how majestic it would be. Scuba diving is magical.”

ST. LOUIS – For scuba divers like Jessi and Jamie Hatfield, taking the plunge beneath the waves is a gift.

“I never realized how majestic it would be. Scuba diving is magical,” said Jessi Hatfield, who convinced her husband to give diving a try.

“When we first started dating she told me how excited she was about scuba diving and it made me want to do it,” Jamie Hatfield said. “Scuba is me being Superman, flying through the water.”

The underwater thrill of scuba diving was unexpected.

“I was 21,” recalled Jessi Hatfield. “It was 2005 and I was run over by a runaway minivan. There was a van with no one in it and it rolled down a hill with the door open and hit me and folded me in half, so it exploded my spinal cord and I have a spinal cord injury at my waist.”

Eight years ago, Jamie Hatfield, an Air Force veteran, was celebrating his 31st birthday when his life changed forever.

“In August of 2010 I fell from the second story deck and suffered a C-7 spinal cord injury,” said Jamie Hatfield. “I’m one of the few people that is still able to move my arms and my legs even though I’m a quadriplegic.”

The Hatfields credit their participation in LifeWaters for finding joy in life at a time when both struggled with severe spinal cord injuries. LifeWaters is an all-volunteer nonprofit organization that teaches adaptive scuba diving to military veterans and others with physical injuries like spinal cord damage or amputation, and emotional disabilities like post-traumatic stress disorder.

Services were recently extended to first responders. Grants and donations fund LifeWaters so there’s no cost to participants who attempt scuba diving certification.

“We’re helping the police, first responders, civilians to get a life back,” said LifeWaters executive director Gary Bufalo. “To give them life, to give them challenges and something to look forward to. Instead of being trapped in a wheelchair you’re free to float. There’s no pain, there’s no gravity, there’s no pressure on your body. Everybody I’ve taken in the water, when they come up, the joy in their face, it brings tears to my eyes. It makes my heart happy.”

Charlie Wright is a certified therapeutic recreation specialist at the VA Medical Center Spinal Cord Injury Service in St. Louis. He founded LifeWaters in the 1990’s in Phoenix and brought the program to the St. Louis area when he came here to work.

“I went out and got a credit card, bought ten sets of gear and got a trailer and said we’re going to start training,” said Wright.

In a community partnership, the Veterans Administration allows LifeWaters free use of its Jefferson Barracks swimming pool.

“We hear wonderful things from our veterans who participate in this program about how rewarding it is and just life-changing for them,” said Marcena Gunter, public affairs manager for the VA St. Louis Healthcare System. “When we see things, our veterans are interested in, things that can help them progress in their rehab, we try and connect them back, and so LifeWaters was one of the 501c3’s that was out there that was actually engaged in doing these kinds of projects.”

No one knows for sure why LifeWaters members who live with chronic pain immediately get relief underwater.

“I don’t know why but my pain goes away,” said Jessi Hatfield. “When you talk to most of our divers who do have pain, including me, we either have no pain or a lot less pain, not just when I’m in the water but for a few days after I get done diving.”

“The majority of the people we take down, they tell me seven to ten days after we dive they don’t have to take any pain pills and they feel alive and energized,” said Bufalo.

Some LifeWaters members said it’s a joy to be able to rediscover movement underwater that’s impossible on dry land because of their physical disability.

“A lot of the folks who dive with us, including myself, when we start diving, we’re not really sure what we can do,” said Jessi Hatfield. “You learn that you can go out to new places, that you can try things that you may have thought weren’t possible.”

For more information about LifeWaters or to donate, click here.

Facebook
Twitter
Email
Mix
Digg
Previous articleWheelchair curling at the 2018 Winter Paralympics: All you need to know
Next articleStudy shows bowel care is top concern for those with spinal cord injury

10 of the most significant advances in spinal injury repair