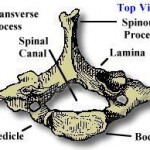 The spine is made up of 24 segments called Vertebrae. These bones are stacked on top of one another.

There are seven vertebrae in the neck called Cervical vertebrae. These are often referred to as C1 through C7 (top to bottom). The skull sits atop C1.

The 12 vertebrae in the region of the chest are called Thoracic vertebrae. From top to bottom, these are referred to as T1 through T12. Two ribs are connected to each thoracic vertebra, one on either side. All the ribs and thoracic vertebrae together form the thoracic cage which surrounds and protects the heart and lungs.

The abdominal portion of the spine is formed by five Lumbar vertebrae, referred to as L1 through L5. These vertebrae are much larger than those of the thoracic spine, which in turn are larger and stronger than the cervical vertebrae. The vertebrae increase in size from top to bottom to accommodate the increasing body weight.

Except for C1 and C2, all the vertebrae are similar in structure. A typical vertebrae is shown here. Each vertebrae has a drum shaped front section called the body. The purpose of the body is to support weight. Toward the back of the vertebrae, a bony arch (the lamina) surrounds a space called the spinal canal. The spinal cord and nerve roots are located in the spinal canal. Bony projections from the arch, called processes, serve as points of attachment for ligaments and muscles. The rear-most projection of each vertebrae is called the spinous process and is the only part of the vertebrae that can be felt through the skin (the ridge down the middle of your back).

The manner in which the vertebrae are stacked is shown above. Between vertebral bodies are small fibrocartilage cushions called discs. These act, in part, as shock absorbers. Strong ligaments bind the vertebrae together. Although the ligaments will stretch to permit limited movement, they are rigid enough to maintain alignment of the spinal canal as it passes through each vertebrae. The vertebrae, discs, and ligaments are able to maintain the correct alignment and consequently protect the spinal cord against all but the most violent injury. 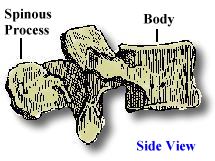 The L5 vertebrae rests on the sacrum, a large bone made up of several smaller vertebrae-like bones which have fused together. The sacrum forms a base for the spine and the back part of the pelvis.