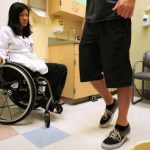 Kim was an athletic, third-year medical student who dreamed of becoming a sports doctor or trauma surgeon when she broke her neck bodysurfing in 1997. The accident initially left her unable to walk or use her hands.

Today she competes in triathlons with a hand-cycle and surfs on a board outfitted with handles. Kim also directs spinal cord injury programs at UCI’s Reeve-Irvine Research Center and at UC Irvine Medical Center, where she works to kick-start early rehabilitation therapies as soon as patients are medically stable.

“Patients absolutely love her,” says Reeve-Irvine director Oswald Steward. “People with spinal cord injuries usually go to doctors who don’t have any real understanding of what they’re going through. Suzy does.”

What Kim keenly understands is that there is no time to waste for the estimated 120 Orange County residents – many of them vigorous and under 40 – who annually suffer catastrophic spinal cord injuries.

“We’re learning more and more from basic science research that we need to activate a patient’s nervous system sooner to begin rerouting neural pathways,” she says. “They may not be able to participate in the aggressive therapies at first, but there are a lot of things we can do, even simply moving joints and muscles for them.”

Neurologically, the window for maximum recovery of function is usually the first nine to 12 months after a spinal cord injury. The more stimulation the nerves get during this period the better. Unfortunately, Kim says, most rehabilitation covered by insurance is based on a formula for bone and muscle injuries. “A 30-minute session once or twice a week is not enough,” she says.

In her role as a physiatrist – a specialist in physical medicine and rehabilitation – Kim develops activity-centered plans tailored to individual patients and coordinates all aspects of their care for optimal healing.

“I’m sort of the quarterback who makes sure all the necessary treatments are scheduled and the patient is receiving quality care,” she says. “Finding the right fit for a wheelchair, for example, can make a huge difference. Do patients have transportation to get to therapy? What kind of insurance resources do they have to get the correct ankle brace?”

Kim had her Laguna Hills family and a tight group of friends to help when she hit a sandbar while bodysurfing in Laguna Beach in November 1997. She had just transferred from Chicago Medical School to the University of Southern California to be closer to her mother, a former Olympic-caliber hurdler from Korea who was dying of cancer.

“My mom was such an inspiration,” Kim recalls. “I watched her in the last six months of her life try to persevere and enjoy life to the very end. My mantra became ‘Everything is possible.’ I never questioned whether I would return to medical school – only how I was going to do it.”

Dissatisfied with her limited physical therapy at an inpatient rehabilitation center, she pushed herself with an athlete’s discipline. “I called it ‘granny rehab,’” Kim says. “When it ended for the day, I would circle the center in my wheelchair over and over. The nurses used to laugh. But I was hungry, and I kept thinking, ‘Let’s go! Let’s get things moving!’”

She resumed medical school 10 months after her accident, working up to the more physically demanding rotations at USC. It took nearly two years to regain full use of her hands – although she still can’t snap her fingers. Friends raised $9,000 to buy a specialized wheelchair that could maneuver her into a standing position for surgical rotations.

After an internal medicine internship at Chicago’s Lutheran General Hospital and a prestigious residency at the Rehabilitation Institute of Chicago at Northwestern Memorial Hospital, Kim took a job running the inpatient spinal cord injury program at Stanford Hospital & Clinics in California. Next she developed outpatient neurological rehabilitation programs for Kaiser Permanente in Northern California, becoming a regional specialist in the care of patients with poliomyelitis, spina bifida and degenerative spinal diseases.

But she longed to return to Orange County and found herself paying close attention to the research being done at UCI’s Reeve-Irvine, including groundbreaking stem cell trials that restored motor function to paralyzed rats.

Fortuitously, Reeve-Irvine had an opening, as did UC Irvine Medical Center, which brought her aboard in late 2008 to help build a program to treat traumatic neurological injuries.

Her five-year plan is to position the program as a nationally rated “model system of care.” To meet this goal, UC Irvine needs an outpatient spinal cord injury rehabilitation facility, which Steward estimates will cost about $5 million to equip and launch.

On the research side, Kim is partnering with Intel Corp. to create a vest that can deliver electrical stimulation and track exactly which torso muscles are being used – vital in helping build core muscle strength in paralyzed patients. She also is collaborating on clinical trials measuring the efficacy of mental imagery in improving a spinal injury patient’s gait.

Tom Hampton, a firefighter who survived a paragliding accident at Torrey Pines in August 2007 and is learning to walk again, volunteered for the trials.

“I’ve been around a lot of doctors in my years as a fireman, and I can tell the good ones right off,” he says, marveling at the sheen of sweat under his carbon-fiber leg braces – evidence of a thorough workout. “Suzy really understands what she’s talking about. We’re both people who don’t give up.”