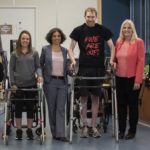 Two research participants living with traumatic, motor complete spinal cord injury are able to walk over ground thanks to epidural stimulation paired with daily locomotor training. In addition, these and two other participants achieved independent standing and trunk stability when using the stimulation and maintaining their mental focus.

The research, conducted at the Kentucky Spinal Cord Injury Research Center at the University of Louisville, was published online early and will appear in the Sept. 27 issue of the New England Journal of Medicine.

This groundbreaking progress is the newest development in a string of outcomes at UofL, all pointing to the potential of technology in improving quality of life – and even recovery – following spinal cord injury. This latest study builds on initial research published in The Lancet in 2011 that documented the success of the first epidural stimulation participant, Rob Summers, who recovered a number of motor functions as a result of the intervention. Three years later, a study published in the medical journal Brain discussed how epidural stimulation of the spinal cord allowed Summers and three other young men who had been paralyzed for years to move their legs. Later research from UofL demonstrated this technology improved blood pressure regulation.

“This research demonstrates that some brain-to-spine connectivity may be restored years after a spinal cord injury as these participants living with motor complete paralysis were able to walk, stand, regain trunk mobility and recover a number of motor functions without physical assistance when using the epidural stimulator and maintaining focus to take steps,” said Susan Harkema, PhD, the study’s author, professor and associate director of the Kentucky Spinal Cord Injury Research Center. “We must expand this research – hopefully, with improved stimulator technology – to more participants to realize the full potential of the progress we’re seeing in the lab, as the potential this provides for the 1.2 million people living with paralysis from a spinal cord injury is tremendous.”

Progress for individuals living with paralysis

The American Spinal Injury Association Impairment Scale (AIS) was used to classify the spinal cord injuries of each of the four participants. When the four participants joined the study, they were at least 2.5 years post injury. They were unable to stand, walk or voluntarily move their legs.

Eight to nine weeks prior to the implantation of an epidural stimulator, they started daily locomotor training – manual facilitation of stepping on a treadmill – five days per week for two hours each day. Although there were no changes to their locomotor abilities prior to the implant, following the epidural stimulation participants were able to step when the stimulator was on and the individual intended to walk. Participants 3 and 4 were able to achieve walking over ground – in addition to on a treadmill – with assistive devices, such as a walker and horizontal poles for balance while the stimulator was on.

“Being a participant in this study truly changed my life, as it has provided me with a hope that I didn’t think was possible after my car accident,” said Kelly Thomas, a 23-year-old from Florida, also referred to as Participant 4. “The first day I took steps on my own was an emotional milestone in my recovery that I’ll never forget as one minute I was walking with the trainer’s assistance and, while they stopped, I continued walking on my own. It’s amazing what the human body can accomplish with help from research and technology.”

Jeff Marquis, a 35-year-old Wisconsin native who now lives in Louisville, was the first participant in this study to attain bilateral steps.

“The first steps after my mountain biking accident were such a surprise, and I am thrilled to have progressed by continuing to take more steps each day. In addition, my endurance has improved, as I’ve regained strength and the independence to do things I used to take for granted like cooking and cleaning,” said Marquis, who is participant 3 in New England Journal of Medicine study. “My main priority is to be a participant in this research and further the findings, as what the University of Louisville team does each day is instrumental for the millions of individuals living with paralysis from a spinal cord injury.”

“While more clinical research must be done with larger cohorts, these findings confirm that the spinal cord has the capacity to recover the ability to walk with the right combination of epidural stimulation, daily training and the intent to step independently with each footstep,” said Claudia Angeli, PhD, senior researcher, Human Locomotor Research Center at Frazier Rehab Institute, and assistant professor, University of Louisville’s Kentucky Spinal Cord Injury Research Center.

This research is based on two distinct treatments: epidural stimulation of the spinal cord and locomotor training.

“We are seeing increasing interest in the use of neuromodulation procedures and technologies such as epidural stimulation in the treatment of spinal cord injury and restoration of locomotor, cardiovascular and urodynamic functions,” said Maxwell Boakye, MD, MPH, MBA, chief of spinal neurosurgery at UofL and clinical director of the Kentucky Spinal Cord Injury Research Center. “Epidural stimulation is likely to become a standard treatment with several improvements in design of the device to target more specific neurological circuits.”

The study was funded by the Leona M. and Harry B. Helmsley Charitable Trust, University of Louisville Hospital and Medtronic plc.Fo

More about the research participants

Jeff Marquis was living in Montana, working as a sous chef and enjoying an active life kayaking, mountain biking, skiing and snowboarding. However, in the fall of 2011 his life changed forever while biking on a mountain trail, as he missed a jump and landed on his head which left him unable to move.

He sustained a C 5-6, Asia B spinal cord injury and was a quadriplegic, paralyzed from the chest down. Marquis spent the next two years in rehab therapy, strengthening the muscles above his injury. He added his name to the research database at the University of Louisville’s Kentucky Spinal Cord Injury Research Center shortly after his injury and got the call to participate in 2014. As part of Marquis’s recovery process, he had an epidural stimulator surgically implanted in his spine and completed a rigorous schedule of daily activity-based step and stand therapy sessions at Frazier Rehab Institute. This technology and physical training, coupled with mental intention, allowed him to take voluntary steps on his own. In addition to being less fatigued, which was a significant problem prior to the implant, Jeff no longer needs daily in-home help and also now shops, cooks and bakes again— activities he was unable to do before the epidural stimulator.

Kelly Thomas grew up in Citrus County, Florida, riding horses, raising show cattle and helping her dad on the ranch. In 2014, a car accident left her a paraplegic with a C7, T1 incomplete spinal cord injury. She was paralyzed from the chest down, unable to use her legs.

Believing recovery was possible, Thomas learned about Harkema and applied to participate in research at the University of Louisville’s Kentucky Spinal Cord Injury Research Center. She was admitted to the research program in 2017 and had the epidural stimulator implanted that September. Thomas was committed to her training and achieved independent right leg stepping on the treadmill after just three therapy sessions. Among the many accomplishments in her journey towards recovery, she has achieved walking over ground with a walker, without contact assistance from trainers, when she has the mental intention to walk.

Thomas continues therapy training and has moved back to Florida to pursue a bachelor’s degree in criminal justice at the University of Central Florida. After graduating, she plans to attend law school.

Fighting back one ‘huff and puff’ at a time