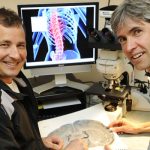 EDMONTON – Research led by a pair of University of Alberta scientists has uncovered a surprising phenomenon that offers hope of new treatments for people with spinal-cord injuries.

The team has pinpointed a unique ability of neurochemical receptors in the spinal cord as the reason why patients with partially and even fully severed cords often have some muscle activity.

With further study, it’s a discovery that could soon allow experts to improve the recovery process with new classes of drugs and therapies that were previously never considered, says Dave Bennett, co-leader of the research published in this month’s Nature Medicine.

“We uncovered the mechanism for how the spinal cord recovers function, plus how it ultimately produces unco-ordinated spasms,” says Bennett, a professor with the U of A’s faculty of rehabilitation medicine.

The spinal cord contains networks of nerve cells that Bennett describes as “mini-supercomputers” controlling all sorts of muscle activity, from walking to bladder control.

These neurons each have receptors designed to receive serotonin. This chemical is released by the brain and travels down the spinal cord, where it excites the neurons into a state of readiness to accept commands from the brain.

In basic terms, when a person wants to start walking, the system must be primed before the brain tells the neurons to move the muscles.

“There are two aspects to it,” Bennett says. “The serotonin is like loading the gun. It gets things ready to fire, but doesn’t actually do the firing. Then once the system is ready to go, then the brain throws the switch.”

These processes are partially or fully cut off when people suffer spinal-cord injuries.

Still, months after an injury occurs, even in cases of people with completely severed cords, some activity returns to their muscles — although this often comes in the unwanted form of muscle spasms.

“The spinal cord is trying to recover, and we now understand why it does that,” Bennett says.

The team’s research on rats found the serotonin receptors become spontaneously active, despite the fact the spinal injury prevents serotonin from reaching them. Essentially, the network makes itself capable of firing even though the gun hasn’t been loaded.

“It was really a surprising finding,” Bennett says. “By the textbook definition, receptors are supposed to receive. But here you have a whole bunch of receptors that are critical for walking and other motor functions, and they are active even though they are not receiving anything.”

Ongoing research is now looking at how the discovery can be used to help patients.

In the case of people whose spinal cord is completely severed, one of the biggest issues is debilitating muscle spasms. Since it’s now known that serotonin receptors are responsible for those spasms, it’s possible to administer drugs to block the receptors, Bennett says.

The trick is to find drugs that target only specific receptors, rather than drugs that block receptors all over the spine and brain, which can leave patients feeling tired and weak. The team is currently conducting human trials toward this effort.

“Basically, this opens up a new class of anti-spastic drugs we never anticipated we could use because we didn’t know the serotonin system was involved,” Bennett says.

Patients with partial spinal-cord injuries may benefit from certain “anti-depressant” drugs that turn on the receptors harder, the researchers say.

Through physical therapy programs, such patients can learn to use the partial connections they have left in their spine to regain some mobility. The anti-depressant drugs assist that effort, stimulating the receptors to wake up at the right times.

“(The drugs) are a method to regulate the level of readiness in the neurons,” project coleader Karim Fouad says. “We can downregulate it to get rid of spasms, but we can try to up-regulate them when patients need function.

“When we can get the neurons excitable and primed to high level, then suddenly you can make use of them again, and therefore we may see recovery of walking over time.”

More work is needed to determine exactly why the receptors spontaneously turn on after an injury, but Bennet believes the change might be brought about by simple exercise.

Rick Hansen: We can all be difference-makers in the world