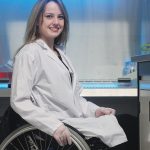 When Razelle Botha could walk, she spent a lot of time dancing.

She’d slip into her strappy heels and dance the Cha-Cha-Cha, the Mambo and the Swing.

“That’s what I find most heartbreaking,” says Botha, leaning forward in her wheelchair, glancing down at her feet, one of them lifeless, both of them swollen in their summer flats.

“I loved hiking and mountains and being in nature, but the thing I miss the most now is dancing.

“I am a young girl and when I used to dance, I felt free and just let go. All young girls need to dance. Now, I feel like a prisoner.”

It’s been a little more than two years since the then-18-year-old was attacked by a gang of thugs who broke into her father’s home in South Africa.

By the time the crime spree ended that terrifying February night, she and her father, Willem, had both been shot and Botha was paralyzed.

Life, as she knew it, was over. She lost the use of her right leg, and with it, her favourite pastimes vanished, too. Her confidence tanked and her fun-loving spirit faded. She has scrambled to regain her sense of security.

However, one thing the young woman didn’t lose was hope. Hope that once again she would walk, hike and, most of all, dance.

“All I have, which I hold on to day after day, is hope,” says Botha.

Now 21 years old, Botha lives in Calgary after moving here a year ago with her father, who still has bullet fragments in his leg, leaving behind the violence of South Africa.

“Without hope I am going to sit in my wheelchair all day and let myself go. That state of mind is fatal. I go forward every day because I have hope.”

Botha’s hope has turned into opportunity with a summer research position at the University of Calgary, where she will study nerve regeneration — an issue she is faced with every day.

But rather than wait and wonder if she will walk again, she is working with other scientists to find the answers.

Botha, like many patients with spinal cord injuries, copes with phantom pain in her right, paralyzed leg.

When it’s not causing intense pain, it feels like pins and needles, she says.

“The pain is chronic, so bad that if I don’t figure something out, I don’t know what I am going to do,” she says of her grant to study nerve regeneration at the U of C as a summer student.

“That’s why it’s so vital for me to be in the lab this summer.”

To manage her neuropathic pain, which originates in her spinal cord, Botha has been prescribed an antidepressant that has been found to perform dual functions. One, to treat depression, and the other to numb the pain.

But along the way, Botha has learned it’s possible the medication may slow nerve growth and regeneration and has other degenerative effects.

She is currently validating those findings, but if that’s the case, it would be devastating to Botha and other spinal cord injury patients who are counting on nerve regeneration if they are ever going to walk again.

Now, Botha and her lab partner, Arthur Lee, are working to see whether that’s the case.

“That’s why I draw hope from the labs,” says Botha. “Not just the work I am doing, but the research going on at labs and universities all over. People are going to want to know if their medication might be holding them back from walking. So, it gives me comfort to know someone is trying to find answers and I am happy to be a part of it.”

She is so convinced the drugs are impeding her nerve regeneration, she’s asked her doctor to reduce her dosage.

“If it means not taking drugs to control my pain because I may walk one day, that’s OK,” said Botha. “I would rather live with the pain, but I cannot compromise any chance I have of walking again one day.”

Prof. Naweed Syed, who is also the head of the department of cell biology and anatomy at the Hotchkiss Brain Institute at the U of C, said having someone like Botha conducting this research illustrates the importance of finding answers.

For Botha, this is very real and that is an inspiration to other students, he said.

“She’s counting on the information to help her for the rest of her life,” said Syed. “She’s more aware of the implications on her directly than most people and she takes it personally — that’s a positive.”

For Botha, everything about her new life in Calgary is nearly perfect.

She’s been camping and hiking in the mountains several times, taking to the trails with a walker or a cane, and she’s learned to enjoy Alberta winters.

She has a specially designed SUV that she drives with her hands and she said her grade point average at the U of C is in the high 90s.

Her father, Willem Botha, said their lives have changed for the better.

“Everything is falling into place,” he said.

“Now we just have to see Razelle walking again. I do believe it will happen in my lifetime.”

Paralyzed in Florida, man moving to Utah in hopes of walking...