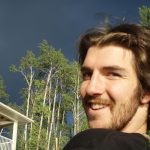 Jeff Scott sounds fairly upbeat calling from his room at the G.F. Strong Rehabilitation Centre in Vancouver last Saturday. He just spent the day out at Stanley Park and the Vancouver Aquarium, in a wheelchair, the result of a spinal injury suffered on the last day of the ski season in April.

“I’ve got a robot I ride around in and push it to it’s limits when I can,” he said. “I take it off-road sometimes.”

Scott, 25, an avid snowmobiler and snowboarder, was injured in a snowboarding accident at Revelstoke Mountain Resort on the last day of the ski season when he missed the landing on a jump.

“I saw the landing, went, “Oh shit!” and got knocked out,” he said. The next thing he knew, he was in a stretcher and couldn’t feel anything in his body. He was taken to Queen Victoria Hospital, where he was surrounded by friends, and then was rushed to Vancouver General Hospital, where his sister was waiting at the emergency room door.

“The support from family and friends has been unreal,” he said. “I can’t put into words how much there’s been and how much it means to me.”

Part of that support includes fundraising by Scott’s Revelstoke-based forest fire fighting team, the Monashee Unit Crew, to raise money both for Scott and for the Rick Hansen Foundation, which funds research into spinal injuries. A golf tournament held at the Revelstoke Golf Club on June 18 raised more than $7,000 and the crew is also holding a silent auction for a day of hard labour.

Scott was a crew boss with the unit. He joined it seven years ago when it was based in Houston, B.C., and remained with it even after he moved to Revelstoke several years ago. By a stroke of luck, the government transferred the crew to Revelstoke this summer, which worked out perfectly for Scott.

Since his injury, Scott has been slowly recuperating. It took him eight weeks before he could move his arms and scratch his face. Now, he said, he is slowly beginning to feel a tingling sensation elsewhere in his body. “The more I force my muscles to move, the more I tingle,” he said. “I’m going to take it day-by-day and try and focus on recovering as much as I can.”

Erik Hanson, a former roommate and member of Scott’s fire crew, described him as an “eternal giver.”

“He has this awesome circle of friends, he connects people all together,” Hanson said. “He teaches people and always has been fantastic for everyone else.”

At the golf tournament, Scott called up and was placed on speakerphone so everyone could talk to him.

“It was just awesome. Everyone from all his different circles of life connected together, new friendships were formed, a great party was had, a lot of laughs,” Hanson said. “Not only did it help out his situation but it brought all these people together.”

The hard labour auction ends July 16 at 5 p.m. and bids are being accepted at Home Hardware. Half the proceeds will go to support Scott and the other half will go to the Rick Hansen Foundation.

Scott’s tentative discharge date is Oct. 12 and he intends on returning to Revelstoke when he’s let out.

He is very grateful for the support, which should help him adapt to life in a wheelchair, depending on how his rehabilitation goes.

“The costs are unknown until you plateau in your recovery,” he said. “Having this support helps me rest assured I’m going to be okay.”

Obama may reverse many Bush actions