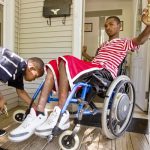 Jarvis Williams dashed forward in the red-and-white uniform familiar to anyone who’s seen the Jesse White tumblers defy gravity. Going last in a line of acrobats during the parade in Wheeling, he gathered speed, bounded off the trampoline and turned two-and-a-half somersaults.

Williams would say later he had done the same daring maneuver at least 50 times. The Fenger High School senior had learned to make the jaw-dropping stunts look routine, just as thousands of other youngsters had done as members of the famous team named after Jesse White, the Illinois secretary of state.

But on this particular day — the Fourth of July, 2008 — something went wrong. Williams said he turned the flips but over-rotated just before landing, coming down on the back of his neck after soaring about 10 feet off the ground.

“I started getting dizzy, and I couldn’t get up,” he said. “They just said my nerves were shot.”

A teammate picked him up over the shoulder, he said, and carried him to the team’s van.

Williams’ teammates continued their performance, drawing their usual oohs and aahs from the crowds lining the street as Williams waited in the van, he said.

His days as a tumbler were over. He had suffered a spinal cord injury and would never walk again, his lawyer and family members said.

In a lawsuit recently filed in Cook County Circuit Court against Jesse White Tumbling Team Inc., Williams claims the nonprofit group should have done more to treat him.

“We’re not saying the team caused the injury,” said Tony Romanucci, Williams’ lawyer. “Our allegation is that the team didn’t recognize his injury as being as significant as it was.”

The teen suffered what’s known as an “incomplete” spinal cord injury, with total loss of function in his legs and limited use of his arms, his lawyer said. He can eat by himself and drive a specially outfitted van, but he relies on a wheelchair to get around.

The suit claims that there are steps the team could have taken after Williams’ accident that could have improved his outcome. These included calling an ambulance immediately, not moving him and not allowing him to ride back to team headquarters near downtown in the team van.

Jesse White, who started the tumbling team in 1959, declined to comment through team lawyer and spokeswoman Donna Leonard. Leonard said the team hasn’t seen the lawsuit yet.

The injury underscores the dangers of both tumbling and cheerleading, its similarly high-flying, high-risk cousin, experts say.

Cheerleading accounts for 65 percent of all catastrophic injuries in girls’ high school athletics despite comprising just 12 percent of participants, according to a report by the National Center for Catastrophic Sport Injury Research at the University of North Carolina. About 30,000 cheerleaders get treated in emergency rooms nationally each year, the report said. Over the last quarter century, at least 73 catastrophic injuries have occurred.

In many cases, inadequate care after an accident can make a bad situation worse, said Kimberly Archie, director of the National Cheer Safety Foundation.

In 2008, the foundation published a guide to prepare youth sports coaches and trainers for catastrophic injuries.

Before he was injured, Williams, now 20, was looking forward to his senior season of football; he was both a wide receiver and defensive back and harbored dreams of playing in college. Instead, he spent the rest of the summer and part of the fall hospitalized, undergoing surgeries and therapy to try to restore as much movement and muscle control as possible.

“Everything he’s learned, achieved and accomplished is gone,” said his stepmother, Torri Jones.

The family has installed elevators in front and back of its gray brick home in West Pullman and has gotten help from an array of relatives and friends to assist Williams with daily tasks, she said.

Williams’ parents run the Will Feed food pantry in the Englewood neighborhood and said the tumbling team had been “fantastic” for him.

Fresh from two years in the Army and a minor league stint with the Chicago Cubs, White was asked in 1959 by the Chicago Park District to put together a gymnastics program. Soon thereafter, his students gave a demonstration of their skills, and word quickly spread.

“Our first break was performing during halftime at a DePaul game,” White told the Tribune in 1991.

Tumblers must keep at least a C average and stay gang- and drug-free. Alumni include doctors, lawyers and adults in many other professions, organizers said.

Thousands of youths, often from public housing, have become Jesse White tumblers during the team’s 51 years; only a small number of them have ever been kicked off the team for scrapes with the law, White told the Tribune.

“We try to instill a sense of fair play, a sense of honesty,” he said. “You try to save them all, but no program’s perfect.”

Tumblers get a stipend for each performance.

The accident and its aftermath left Williams’ parents questioning how well the team was prepared to handle a catastrophic accident.

“They just made it sound like there was nothing wrong with Jarvis,” his stepmother said. “When a child tells you he can’t move, that’s your instruction to now call an ambulance, with or without the parent’s permission.”

Williams says he can’t remember how long the trip from Wheeling to the city took. His parents wound up driving him from the tumbling team’s headquarters downtown to Northwestern Memorial Hospital.

Instead of getting him emergency treatment, Romanucci said, team officials had kept their focus on the parade.