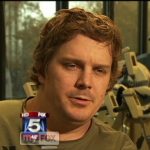 ATLANTA – A 29-year-old Australian man who suffered a spinal chord injury found himself at Atlanta’s Shepherd Center for intense rehabilitation.

“I push myself every day,” said Shepherd Center patient Joshua Clift. “I treat it as a job, like you’re doing the extra hours and you only get out what you put in.”

Clift is more than 9,200 miles from home, but the 29-year-old isn’t complaining.

“It’s the best decision I ever made, to leave Australia, come to Atlanta and come to the Shepherd Center,” Clift said.

How Clift ended up in Georgia is a story in itself.

“I had two accidents. I had my first accident playing rugby. I dislocated my C4 and C5 vertebrae in a bad tackle,” Clift said. “With the first accident, I was totally conscious, and knew I’d broken my neck.”

After two surgeries, and two weeks in the hospital, Clift walked out in a neck brace.

“I went back to the farm and was told to rest. [I] didn’t rest as much as I should have. [I was] back to riding horses and doing cattle work,’ recalled Clift.

Just three and a half months later, Clift was involved in another accident.

This time, Clift’s injury was much more serious and left him paralyzed.

“I was told I’d never walk. But as soon as I was told that message, I threw it away. It’s something I’ve never envisioned, not walking,” Clift said.

Hoping to defy doctors, Clift went online and found Shepherd Center and a program called Beyond Therapy, which is designed to push his body as far as it can go.

“When I first went to rehab, I couldn’t even lift my arms. When I got here, I was pretty scrawny and weak. I had nothing in my legs,” Clift said.

In the 15 months, Clift has pushed hard.

“I guess the biggest fear is, ‘Is today going to be a good day?'” said Clift. “It’s one of those things where you take one step forward two steps backward and every day you’re evaluating, ‘How can I improve. What can I do better the next day. Where did I fall short today?'”

“Josh is one of the most dedicated patients I’ve ever worked with. He’s extraordinarily committed to his recovery, he’s gone above and beyond in every arena,” said Annika Bender of Shepherd Center. “He comes off as a very independent, very casual, friendly person. So I don’t think you see maybe the difficulties he’s truly had to go through to be here.”

“I’d love it to be quicker, but we’re getting significant progress, and seem to be improving week by week,” said Clift.

Clift said he’s grown a lot along the way.

“Before my accident, I didn’t have patience. I could probably write a book on patience now,” Clift said.

Clift said his hope is to go home to Australia stronger, and more independent.
“Within the next couple of years, I see myself on a walking stick, or a frame, like you’ll never be 100 percent. There will always be a few scars to show from it,” Clift said.

With every step, Clift is getting closer to home.