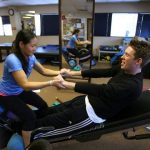 Practically from the time he could walk, Darren Templeton of Kinnelon enjoyed playing sports: football, basketball, baseball, soccer. As a student in Kinnelon High School, he was a member of the hockey and tennis teams, and he was an avid skier.

While vacationing with his family near Manahawkin in July 2004 … a month after graduating from high school … he dove from his family’s boat. The tide was rapidly changing, and water that Templeton thought was deep proved to be too shallow. He broke his neck, leaving him a quadriplegic.

Some people might be excused for succumbing to despair or depression. But Templeton’s main emotion was frustration. Following the accident, he went through weeks of physical therapy that was beneficial but unsatisfying.

“I had played sports. I was used to tough practices, tough conditioning. In physical therapy, they tend to treat you as fragile. I wanted to be pushed,” he says.

“Darren is considered a quadriplegic because his injury was to his neck and all four limbs are compromised,” explains his mother, Cynthia Templeton. “”Darren is fortunate that he has use of his shoulders and some movement in his arms. Some other people with the exact same level of injury do not have these capabilities, while some have even more movement than Darren. That is the complicated world of spinal cord injury: No two injuries are alike.”

His desire to go to the next level of therapy led Templeton, his mother, and his father, John, to Project Walk, a California-based program specifically for people with spinal-cord injuries.

“It was more like what I was used to,” he says. “”They were there to work you hard.”

The Templetons’ experience with Project Walk convinced them that there was a need for a similar program on the East Coast. The result: Push to Walk, a nonprofit facility in Riverdale.

Push to Walk opened its doors in January 2007 with three clients, including Darren. It currently serves 30 people from New York and New Jersey.

Maintaining Push to Walk over the past four years has been a challenge, but Cynthia Templeton says their growth attests to its value. They started with a 1,000-square-foot space in Bloomingdale, she says.

John and Cynthia Templeton both were able to draw on business experience when they began planning Push to Walk. In 1995, he had started Millennium Technologies, a company that provided wireless hardware and equipment for warehouses. During the late 1990s, she had run a business importing and selling hockey pucks, besides owning and managing several real estate properties.

Nonetheless, a nonprofit organization has proven to be a different experience, Cynthia Templeton says.

“”A founder of a nonprofit is not the same as the owner of a business,” she says. “”We had to look at what was good for the people we hoped to serve.”

Cynthia Templeton says they were able to draw on the expertise of several friends and business associations for legal and technical advice. They were aided in their efforts by Eric Prol of Kinnelon, who was Darren’s personal trainer following the accident.

“”When Eric started with Darren, he didn’t have any experience working with spinal cord injuries, but he was willing to learn,” she says.

The family also developed a relationship with Project Walk.

“”We’re certified with Project Walk, and we pay a licensing fee for the use of their training program,” Cynthia Templeton says. “”But Push to Walk is an independent facility.”

The Push to Walk program includes activities and exercises that usually are not covered by occupational therapy and physical therapy, Cynthia Templeton says.

Push to Walk does not accept insurance reimbursement. The fee is $85 per hour for one-on-one training.

“”Our clients only cover 75 percent of our operating expenses,” she says.

The rest is made up by grants, donations and fundraisers, such as an annual golf outing and a poker tournament (which this year will be March 25).

For Cynthia Templeton, telling people about Push to Walk isn’t solely about asking for money. She also aims to educate people.

“”A lot of people don’t understand what a spinal cord injury means. It’s not just that a person can’t walk. There are issues with bowel and bladder functions. There is the impact on family and friends.”

At the same time, she says, “”people with spinal cord injuries have hope. Hope for independence. Hope that the scientific community is working toward a cure. Hope that they will have happy, productive lives.”

For that, Templeton need look no further than her son, who will turn 25 in March. While still undergoing therapy, Darren Templeton took online classes and earned his undergraduate degree from Ramapo College. He is now concluding the MBA program at Rutgers. He also has coached a youth hockey club in Kinnelon.

He’s regained limited use of his arms, which is one area of physical therapy stressed at Push to Walk, says Mike Anastasiou of Easton, Pa., a trainer at Push to Walk.

“”Darren is so determined,” Cynthia Templeton says. “”It’s amazing all the things he’s capable of. He shows how important it is for people to have a positive attitude.”

“”More than anything, you have to have a good attitude,” her son says. “”Life isn’t over. That’s what I hope we’re doing with Push to Walk. We give people help and support so they can go on to live very normal lives.”

For more information on Push to Walk, visit www.pushtowalknj.org.